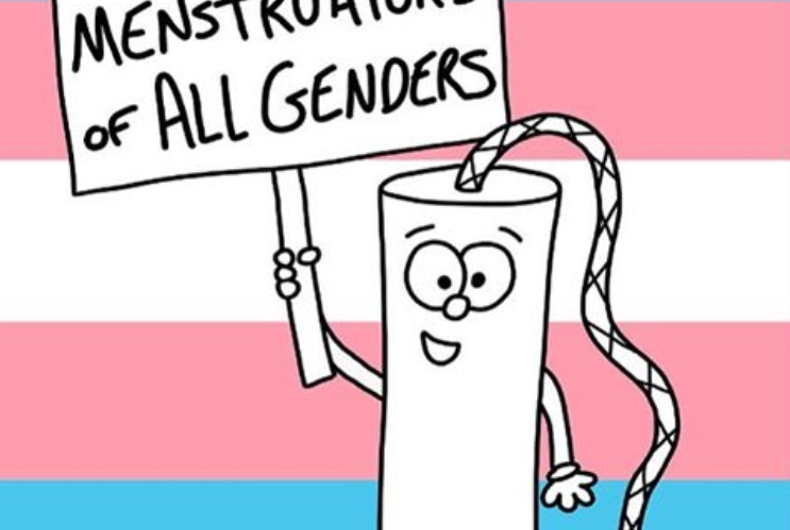 Toni the Tampon, a character in a coloring book by the same name, teaches young menstruators that periods are nothing to be ashamed of. And now they also want to let people know that people of all genders can get periods too.

In an interview with Mashable, Toni the Tampon creator Cass Clemmer said that Toni has a gender-ambiguous name because they are non-binary. In the book, Clemmer doesn’t use pronouns to refer to Toni at all.

The choice was made so that the book would “affirming to all menstruators,” and also because Clemmer identifies as genderqueer. “In my mind, Toni is a little genderqueer tampon – kind of like me in tampon form – who just goes by Toni instead of any pronouns.”

The Christian Post picked up the story after the Mashable interview, quoting a rightwing activist, “Teaching children that even men or boys can have periods is scientific malpractice and child abuse.”

Toni has had an Instagram account for over a year, where they often appear outside the wrapper and in public. Earlier this week, spoke out in favor of “trans and gender non conforming menstruators.”

Clemmer responded with this statement:

The Christian Post calls my move to include trans and queer menstruators “child abuse”. In response, I am donating all profits this week to the @translifeline. Period community, I need your help. Post your support of trans and GNC menstruators, let everyone know that we stand with menstruators of ALL genders. #protecttranskids #menstruators #queeriods #menstrualhealth

Toni also came out to support transgender and non-conforming menstruators on Instagram:

The right-wing media has attacked my #periodcoloringbook all week- calling it ‘child abuse’ because it affirms trans and gender non conforming menstruators. In response, I am donating all profits from this week to the @translifeline. If you stand with menstruators of all genders, please share this post. When they go low, we go high. In solidarity – Cass & Toni #periodpower #protecttranskids #womensmarch #menstrualmovement #menstruators #queeriods #theygolowwegohigh #menstrualhealth #inclusivefeminism

“I’d rather help just one genderqueer or trans menstruator feel like they were seen, than sell a thousand copies only to reinforce the boundaries society draws by gendering periods in the first place,” Clemmer told Mashable.

Clemmer grew up in a missionary community in the Democratic Republic of Congo and didn’t learn much about menstruation as a child. “I didn’t know what a uterus was, and I didn’t know where this blood was even coming from or why. The only thing I was taught was how to clean it up so the world didn’t see it — and then I was sent on my way to figure the rest out myself.”

Feds will give millions to help with Pulse shooting financial aftermath