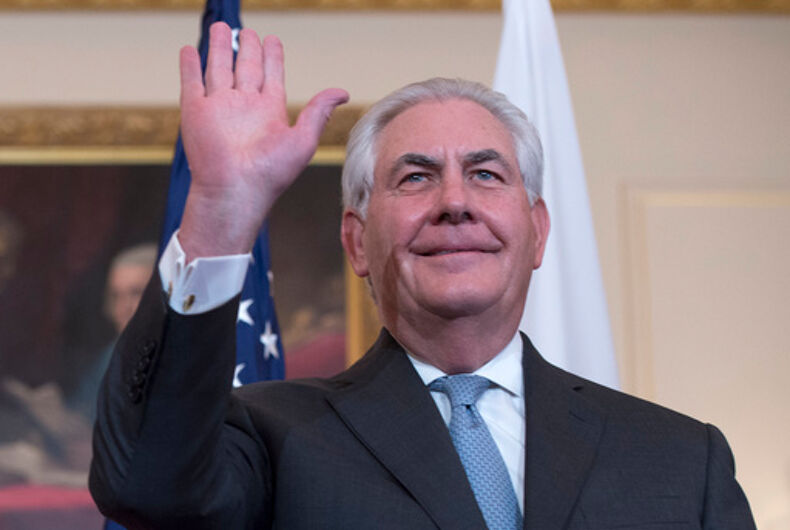 FILE - In this Feb. 10, 2017 file photo, Secretary of State Rex Tillerson is seen at the State Department in Washington. Tillerson has agreed in principle to a White House proposal to slash foreign aid and diplomatic spending by 37 percent but wants to spread it out over three years rather than in one dramatic cut. Photo: AP Photo/Molly Riley, File

WASHINGTON (AP) — Basic freedoms of expression and association are on the decline around the world, the United States said Friday in a report that warned of worsening conditions for opposition groups and human rights activists.

In a departure from past practice, Secretary of State Rex Tillerson declined to announce the report in-person or to speak about it publicly as his predecessors have done. Human rights groups and some lawmakers decried that decision and said it raised concerns that the U.S. was backing away from its traditionally vocal advocacy on human rights.

Corruption, use of torture and discrimination against minorities have gotten worse in some parts of the world, the report said. It laid out concerns about sexual abuse of women, growing crackdowns on the media and internet freedom, suppression of political opposition groups and the inability of people to choose their own governments.

Tillerson, in a letter to Congress about the report, did not address any specific human rights concerns, but said promoting rights and democracy is “a core element of U.S. foreign policy.”

“These values form an essential foundation of stable, secure, and functioning societies,” Tillerson wrote. “Standing up for human rights and democracy is not just a moral imperative but is in the best interests of the United States in making the world more stable and secure.”

Still, Tillerson did not appear before cameras to promote the report, nor has he spoken about human rights publicly since taking office one month ago. A senior administration official noted Tillerson had said in his Senate confirmation hearing, before becoming secretary, that human rights are a consideration in U.S. foreign policy. The official briefed reporters on a conference call on condition of anonymity even though President Donald Trump has said reporters shouldn’t be allowed to use anonymous sources.

Yet Human Rights Watch, whose research is cited by the State Department in its human rights reports, said the Trump administration’s commitment to human rights is already in question due to his policies related to Muslims and his plan to drastically cut the foreign aid budget.

Though the report doesn’t rank or compare countries, its sections on some individual countries indicate areas of the most concern:

—Philippines: The report notes a sharp increase in extrajudicial killings in the Philippines — more than 6,000 suspected drug dealers and users killed by police and unknown vigilantes in the second half of 2016. Despite President Rodrigo Duterte’s claim that authorities would investigate actions taken outside the rule of law, the report says there were “significant concerns about impunity” of government and local officials.

—Turkey: The report says Turkey’s government has imprisoned tens of thousands of people accused of supporting last year’s failed coup attempt, often without much evidence. The Turkish government has also suspended some due process protections as part of the state of emergency enacted after the coup and later extended, the report says. It also details concerns about media freedoms and the high number of journalists arrested.

—China: “Repression and coercion” of those involved in civil and political rights remains “severe,” the report says. It adds that tens of thousands of political prisoners remained incarcerated despite the government’s denial it holds any. Other serious human rights abuses included arbitrary or unlawful deprivation of life, executions without due process, illegal detentions at “black jails,” torture and coerced confessions of prisoners, and detention and harassment of journalists, lawyers, dissidents and petitioners.

—Venezuela: The report warns of “systematic, politicized use of the judiciary” to undermine the legislative branch and to intimidate and prosecute critics of the government. It says “indiscriminate” police action has led to torture and limited press freedoms. The report also notes that the media and other groups have reported extrajudicial killings and torture by police and other security forces.

With Russia off his plate, Sessions is free to pursue his anti-LGBTQ agenda