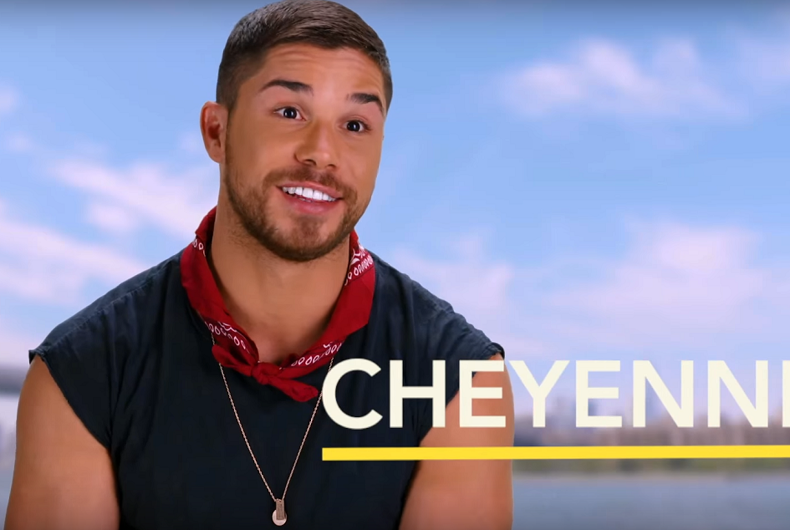 Cheyenne, who may or may not end up with a cocktail thrown in his face.Photo: Screenshot

Gay personal trainer Jason Wimberly took to The Advocate to warn all the gays about a silly reality TV show.

The show in question, Fire Island on Logo, looks like something that I will never watch. I have never seen any of the Real Housewives and besides Rupaul’s Drag Race, I don’t watch reality TV at all.

But since I’m not a busybody, I realize that other people might like that kind of television. To each their own.

Wimberly, though, starts out his moralizing screed with a bizarre story about someone bringing a puppy to the gym he works at:

While said client obviously has some issues of his own to deal with, it reminded me exactly why I am so bothered by the new Fire Island trailer release by Logo TV this week. Let me explain.

I remember when the use of “bitch” on television was a national debate. Now curse words are commonplace in all forms of media.

Oh my, I’m getting the vapers! The b-word has appeared in The Advocate!

Have you ever heard the phrase, “monkey see, monkey do”? Well, humans and monkeys learn the same way.

Really? There are monkey schools with little monkey desks where they use monkey textbooks to learn monkey algebra, and then they have monkey graduation ceremonies complete with monkey mortarboards, before they all start screeching and flinging feces at one another?

While it is thought that some of our innate behavior may in fact be genetic, it has been proved in various case studies that learned behavior greatly influences our decisions, and often times even more so than genetic disposition.

Unnamed studies that “prove” whatever the writer already believes. Where would the internet be without this rhetorical device?

Documenting the escapades of a bunch of gay men on Fire Island may seem harmless, but what effect could it have on gay preteens who have yet to come out?

Why are gay preteens who haven’t come out yet watching Logo? Except for the tweens who have the coolest parents ever, how would they even have access to this show?

More importantly, aren’t adults allowed to watch TV that wouldn’t be appropriate for younger audiences, or do we all have to confine our viewing to Disney movies and My Little Pony because there might be a young person out there somewhere who might see a grown man throw a cocktail in another man’s face?

Now, I have to be fair in saying I uphold myself to some pretty strict standards. I don’t use the f word, I won’t be photographed holding a cocktail unless it’s celebratory champagne, and I’ve never even had a speeding ticket.

His supposedly strict standards don’t include “Mind your own damn business.”

As a public person,

Does this make anyone else think that Wimberly’s just jealous that he’s not going to be on Fire Island?

As a public person, I take the way people perceive me seriously, and not just because of my own self-respect, but for my respect for the LGBT community as a whole. As a minority group, the actions of a few can unfortunately shape the view of many. Giving this sort of behavior a national platform where it becomes normal and invited into our homes is the problem.

Except no. Just no.

This is “politics of respectability” nonsense. A minority group cannot ever be respectable enough to appease the people who hate them. That’s what prejudice means: pre-judging. It doesn’t matter what you do, you have already been judged.

The only thing that a minority group can do is drive itself crazy trying to be respectable enough to deserve equal rights and equal treatment. They can point the finger at one another and say that those gays over there, those are the bad gays, I’m one of the good ones! But people like Mike Pence and Tony Perkins will remain unimpressed; they see being gay as being worthy of disrespect in and of itself.

In a time with so many of our rights being challenged daily, LGBT people must choose to elevate public perception of us as best as we can.

I don’t see how finger-wagging about reality TV makes us seem like anything but insufferable….

Anyway, we should fight to be seen as a diverse population like any other. There are gay doctors, gay truck drivers, gay parents, gay high school students, and gay gym bunnies who go on TV to fight over who kissed who.

In a sign of the times, dystopian fiction is flying off the shelves