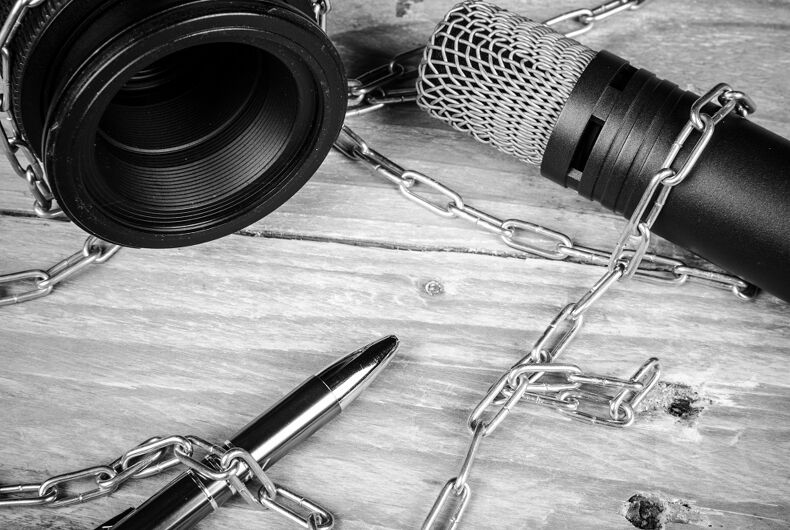 A journalist who was fired by an NPR affiliate after Republican lawmakers complained about her reporting says that she did nothing wrong in the first place.

Jacqui Helbert, 32, was following students from a Gay Straight Alliance near Chattanooga who went to the Tennessee state capital to meet with Republican lawmakers earlier this month. The students went to express their opposition to a bill that would force transgender people to use the bathroom listed on their birth certificates, and the bill has already failed.

Helbert attended the meetings and produced a report about them for NPR-affiliate WUTC, and the report was posted on their website.

Republican lawmakers say that she did not identify herself as a journalist. According to Tennessee representative Kevin Brooks, “I don’t recall anyone having recording gear at all, or anyone looking or feeling like a reporter. I was meeting with kids. These were young children.”

The students were from a high school.

Helbert told the Times Free Press, “It was glaringly obvious who I was… I even had to fumble with all my equipment to shake Bell’s hand.” Helbert was wearing an NPR press pass and headphones and carrying a 22-inch fuzzy microphone which she pointed at speakers during the meetings.

One high school senior who attended the meetings said, “It would be hard to miss her with what she was wearing.”

WUTC receives a major part of its budget from the University of Tennessee at Chattanooga (UTC), and UTC officials met last week with Republican lawmakers who brought up Helbert’s report. According to a school official, one Republican senator Todd Gardenhire said “had issues with the journalistic ethics of the reporter.”

The same official said that a Republican lawmaker brought up state funding of UTC in the context of their complaints about Helbert.

WUTC fired Helbert, posting a statement on their site saying that she was terminated for violating journalistic ethics because she didn’t identify herself as a journalist. “We believe the newsgathering process must be conducted in a manner that instills trust in the public,” the statement read.

WUTC removed the story from its website, but it has been archived elsewhere.

In the report, Republican state senator Mike Bell said that that being transgender is “hogwash.”

“Is it how I feel on Monday? I feel different on Tuesday? Wednesday I might feel like a dog,” Bell can be heard saying.

Helbert also noted that several students were visibly crying after the meeting.

Editor’s note: An earlier version of this story said that the students were from a school in Chattanooga. They are actually from a suburb of Chattanooga.

Will Hollywood ever catch up with television for gay inclusivity?