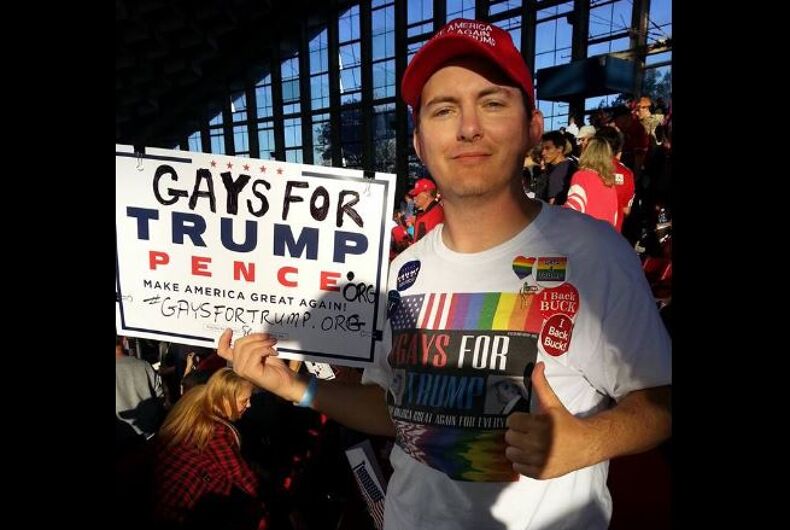 After the Women’s March on Washington, everyone is eager to take the idea and make it their own. Scientists will have their turn on April 22, and there is a National Pride March planned for June 11 for the LGBTQ community to tell President Trump that we will not go backwards.

Now another group of gays is planning to descend on Washington, but they are a distinctly different brand altogether, because they, for some reason, still support Trump, the guy who appointed the staunchly anti-LGBTQ Cabinet, supports the First Amendment Defense Act that would take away our rights, and who won’t stand up for transgender students.

The North Carolina based Gays For Trump group, lead by Peter Boykin, plan to rally at the Washington Monument on Saturday at noon, before marching to the White House, reports the Washington Blade.

“It is for everybody but you will see a lot of rainbow flags,” Boykin said. “D.C.-area Gays for Trump will definitely be attending.”

Singer Joy Villa, who wore a Trump dress to the Grammy Awards, will be a keynote speaker at the D.C. event, a press release said.

“She, along with the March4Trump Organization, is seeking to unite the nation together in support of our newly elected president,” organizers said in a statement. “The goal of these marches and rallies are to peacefully unite all people. March 4Trump is seeking only individuals who wish to spread love rather than hate, unite rather than divide, and support rather than resistance.”

“This is a peaceful assembly,” it continues. “Please do not impede traffic, litter, vandalize, or do anything else illegal and unbefitting…Any violators will be asked to leave and turned over to authorities when appropriate.”

The group previously made headlines for raising funds for a Gays For Trump billboard in Orlando, near the site of the Pulse nightclub shooting, as well as one in North Carolina. His husband, who is also active with the group, was thrown out of a Trump rally in October for assaulting a protester.