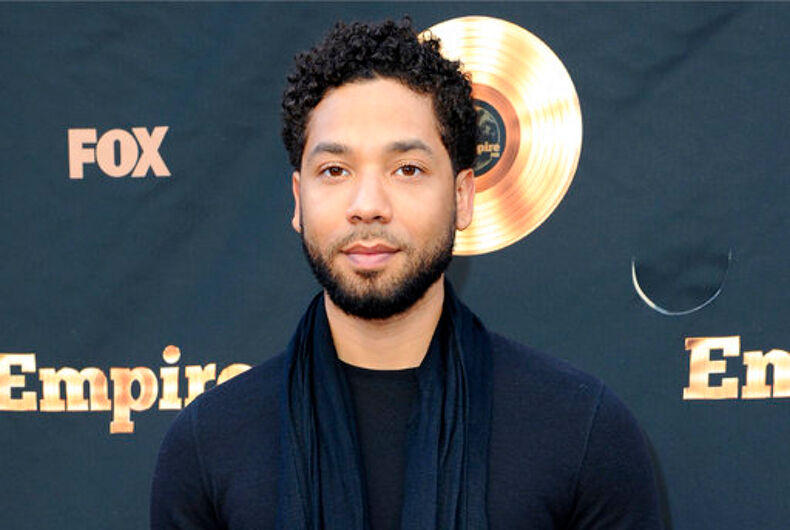 FILE - In this May 20, 2016 file photo, Jussie Smollett attends the "Empire" FYC Event in Los Angeles. On Wednesday, March 15, 2017, Smollett debuted a music video for "F.U.W.", a song about injustice which he wrote and performs, on his YouTube page. Photo: (Photo by Richard Shotwell/Invision/AP, File)

NEW YORK (AP) — While TV star Jussie Smollett was in the recording studio working on his own music apart from “Empire,” set for release later this year, he couldn’t help but write a song about what’s going in the world, from injustice to President Donald Trump.

That’s when he penned “F.U.W.,” short for “(expletive) up world,” around President’s Day and immediately directed a music video to bring his words to life. The clip debuted late Wednesday on his YouTube page.

The black-and-white video features men and women of various ethnicities and highlights injustices, from human and LGBT rights to religious and racial prejudices. A woman wears a hijab in one scene, a boy wears a hoodie in another and four women put their fists up as they stand in front of the words, “My body, my rights.”

“This song is for the oppressed. That’s why I feel like people will connect with it because it is very broad, because oppression is so broad,” he said in an interview Tuesday with The Associated Press.

In another scene, a man in a wheelchair runs over a Donald Trump mask.

“It’s our opportunity to take those masks off and shatter them, so that’s what I did,” he added.

Trump’s apparent mocking of a disabled reporter was widely criticized last year. Some of Smollett’s “F.U.W.” lyrics focus on Trump and his administration: “Why are we back in the past?/ It’s the same script different cast/ All of these alternative facts/ Catch me outside how about that?/ Why is it so hard to keep hope?/ Who got that popular vote?/ Was the whole thing just a joke?/Was the whole thing just one big joke?”

On Wednesday, Trump fired back at rapper Snoop Dogg days after the release of a music video in which he points a toy gun at a clown dressed like Trump and pulls the trigger.

Trump tweeted: “Can you imagine what the outcry would be if @SnoopDogg, failing career and all, had aimed and fired the gun at President Obama? Jail time!”

The White House did not immediate return a request seeking comment about Smollett’s video, which also features a black man standing in front of a noose, images of barbed wire and two water fountains with “white” and “colored” signs above them.

“We had written so many other great songs for my album, but this just felt like ‘I can’t wait for the album, I can’t wait for a single,'” said Smollett, who plans to release an official single this summer. “You couldn’t follow, you know, normal rules or normal protocol with this, you just had to get it out and luckily Columbia (Records) stood behind me.”

During the presidential campaign, Smollett and other “Empire” cast members appeared in an ad endorsing Democratic nominee Hillary Clinton.

Smollett, who was one of the kid stars of “The Mighty Ducks” film, is set to appear in Ridley Scott’s science fiction film “Alien: Covenant” this year. He said it was “freeing” to release a song apart from his “Empire” persona, and he challenged himself by directing the video.

Donald Trump wants to eliminate the Meals on Wheels program