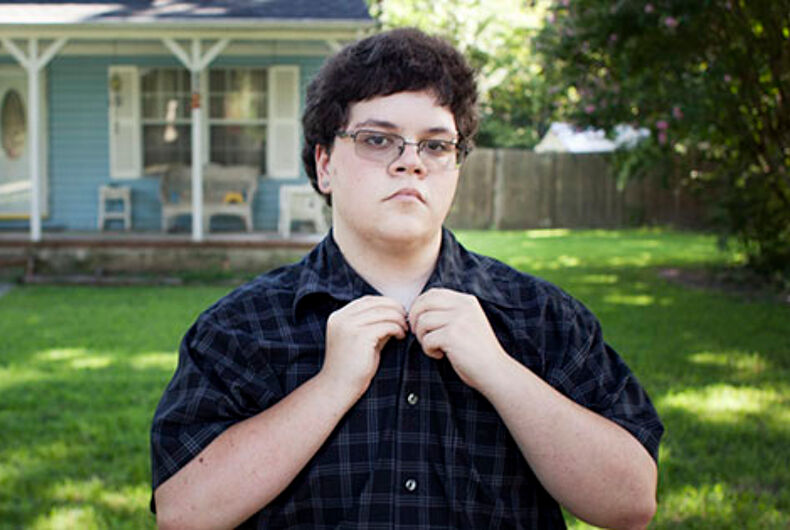 The U.S. Supreme Court dropped the hot potato of transgender rights back in the lap of a lower court Monday morning, vacating a lower court’s ruling in favor of a Virginia transgender student who wants to use the school bathroom corresponding to his gender identity.

The justices did so, reports the Washington Post, because the Trump administration rolled back protections for trans students issued by the federal government under President Obama, in a letter to public schools last month rescinding federal guidance.

The decision comes just three weeks before the high court was scheduled to hear the case of the Gloucester County school board versus 17-year-old Gavin Grimm, a transgender boy who was assigned female at birth.

“This is not what we wanted,” Grimm told reporters in a conference call Monday. ” This is dragging the conversation out longer, and keeping kids in limbo for an extended period of time. But I am still as passionate and happy to be doing this as ever. We are as empowered as we’ve always been. If it took ten years, I’d still do it.”

Grimm said he learned of the decision while in class today via texts and Facebook messages. “I was aware it was a possibility and I was as prepared as I could be,” he said confidently. LGBTQ Nation asked him how his parents were handling the news.

“My mom is an emotional person and this is an emotional process,” Grimm said. “My family is in this fight, and the many conversations we’ve had have been, ‘We are with you and stand by you.'”

Because the federal government’s position has changed, the court ruled that the U.S. Court of Appeals for the 4th Circuit should reconsider the case.

Previously, the 4th Circuit had relied on the federal government’s guidance that school should let transgender students use the bathrooms that matches their gender identity, based on the Obama administration’s interpretation of Title IX. Now those judges will need to decide whether its prohibition of discrimination on the basis of sex also extends to gender identity.

The Trump administration has so far not addressed that issue. But Joshua Block, senior staff attorney at the American Civil Liberties Union’s LGBT Project and lead counsel for Grimm, was undeterred.

“Nothing about today’s action changes the meaning of the law,” Block said in a statement posted online. “Title IX and the Constitution protect Gavin and other transgender students from discrimination. While we’re disappointed that the Supreme Court will not be hearing Gavin’s case this term, the overwhelming level of support shown for Gavin and trans students by people across the country throughout this process shows that the American people have already moved in the right direction and that the rights of trans people cannot be ignored. This is a detour, not the end of the road, and we’ll continue to fight for Gavin and other transgender people to ensure that they are treated with the dignity and respect they deserve.”

Now that the case is back in the hands of a lower court, and given that both Gloucester County and the ACLU lawyers representing Grimm had sought the hearing before the Supreme Court, the Post concluded that it is likely that by the time this case winds itself back before the panel it will have its full nine justices, likely including Judge Neil Gorsuch.

Human Rights Campaign legal director Sarah Warbelow echoed that sentiment. “To be clear, transgender students are covered by Title IX and are entitled to the same rights and protections as every other student. But while this plays out in our courts, we are deeply concerned about the consequences this could have for transgender students, who may not be aware of their rights or be subject to increased discrimination by others who feel emboldened by the Trump administration’s recent actions. Now more than ever it is crucial for all of us to affirm to transgender students that they are equal, they are valued, and there are millions of people across our country who will have their backs, no matter what.”

“It is regrettable that the issue of equality for transgender Americans will not be heard by the highest court of the land,” said Mara Keisling, executive director of the National Center for Transgender Equality. “We are, however, confident that the Court of Appeals will again conclude — as most courts have — that anti-gender discrimination laws like Title IX protect transgender students and forbid schools from singling them out. It’s understandable that many Americans who are still not familiar with their transgender neighbors have questions. But there is simply no reason for Gavin, or the hundreds of thousands of students like him, to be forced to make a ‘walk of shame’ to a separate facility every single day. We expect and urge all schools to meet their moral and legal responsibility to fully respect and include their transgender students, as thousands of schools around the country have already been doing for years.”

PFLAG executive director Elizabeth Kohm vowed to continue their fight, and not just for Grimm. “Today’s decision only reinforces PFLAG’s resolve to stand by Gavin and all trans youth across the country, who need this protection in order to attend school fairly and safely. Our 400+ chapters across the country will continue to work with school districts to make sure they have inclusive policies that protect transgender youth. We will also provide continued support and guidance to students, parents, and all concerned, trusted adults to report acts of discrimination against LGBTQ youth using Claim Your Rights, our joint initiative with GLSEN.”

“This announcement speaks volumes to the ways that President Trump’s actions are already having devastating consequences for transgender youth across the country,” said Matt McTighe, executive director of Freedom for All Americans. “All students, including transgender students, deserve to participate fully and succeed in school, and to feel safe and respected while doing so.”

“The Supreme Court has missed an opportunity to end the painful discrimination currently faced by tens of thousands of transgender students nationwide,” said Eliza Byard, executive director of the Gay, Lesbian, and Straight Education Network.

Calling the court’s decision, “extremely disappointing,” Stacey Long Simmons, director of public policy and government affairs at the National LGBTQ Task Force, said “nothing about today’s action changes the meaning of the law: Title IX and the Constitution protect Gavin and other transgender students from discrimination.”

Editor’s note: this story was updated to include reaction from the ACLU, HRC, NCTE, PFLAG, The Task Force, GLSEN and Freedom for All Americans.

French citizens are begging Barack Obama to run for President