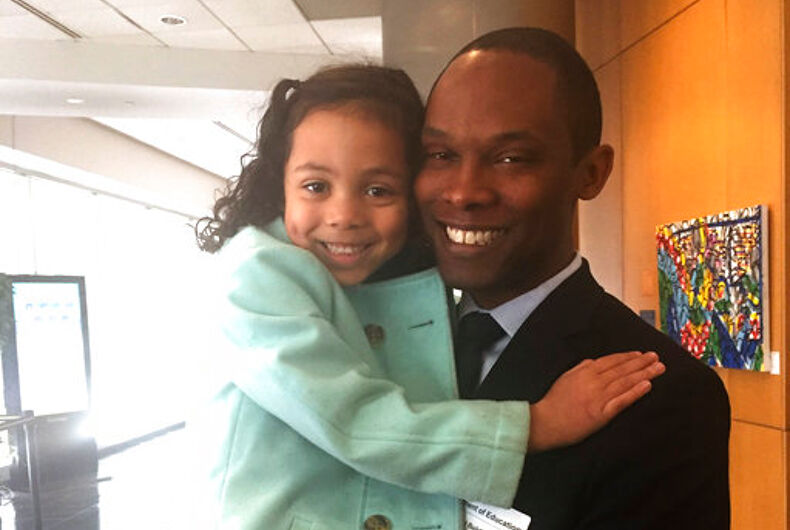 In this photo provided by Vanessa Ford, taken March 8, 2017, Ellie Ford, 5, with her father JR Ford, are seen before their meeting with Education Secretary Betsy DeVos in Washington. Families of transgender students came away from a meeting with Education Secretary Betsy DeVos saying that she was receptive to their concerns but must now follow up with action. Photo: Vanessa Ford via AP

WASHINGTON (AP) — Education Secretary Betsy DeVos watched a transgender girl eat apple sauce and draw and listened to another student’s emotional story of feeling marginalized at school, as activists pressed DeVos to make good on her promise to protect all students.

Parents and activists who met with DeVos on Wednesday said they thought she was moved by their stories, but they still left with little hope that she would be a strong advocate for transgender children.

The meeting at the Education Department came two weeks after the Trump administration rescinded Obama-era guidance that instructed schools to let students use bathrooms in line with their gender, not their assigned sex at birth. The decision was strongly condemned by civil rights groups, who said that it would harm already highly vulnerable students, but it was applauded by conservatives, who said the guidelines violated the safety and privacy of all other students.

Attending the meeting were Ellie Ford, a 5-year-old transgender girl, and high school student Grace Dolan-Sandrino, who told DeVos the middle school she attended did not let her use the girls’ bathroom — as the Obama guidance was not in place then.

DeVos would not commit to any specific actions to help protect students like Grace and Ellie, the parents said. One parent at the meeting said she had lost a transgender child to suicide.

Grace’s mother, Karen Dolan, said of the education secretary: “She sat there and listened to our stories through our tears and at times she seemed to appear visibly moved, but she didn’t react.”

DeVos agreed that there were “thousands and thousands” of transgender students across the country and that children are born that way, according to Dolan, who lives in Washington’s Maryland suburbs.

“There is one thing between increasing your understanding and having your heart moved for an hour and then out of her position of power either acting to protect transgender and gender nonconforming children or acting in a way that will make their lives worse,” Dolan added. “I haven’t seen any concrete action that would give me any reason to be hopeful.”

Grace, 16, who now goes to an inclusive high school where she can use the girls’ bathroom, said that she told DeVos that her decision to scrap the guidance was “an extremely cruel thing to do.” She said that being in an unwelcoming environment dramatically increases a transgender child’s chances of developing depression or committing suicide.

“It is not fair for them to grow up with their human rights being denied,” Grace said in an interview with The Associated Press. “This is beyond bathrooms; this is about our right as transgender people, as humans to exist, to simply exist.”

Vanessa Ford, Ellie’s mother and a resident of the District of Columbia, said that the Education Department already has an existing document, published on its website, that outlines best practices that some schools have used with regard to transgender students. She urged DeVos to promote the document publicly and urge schools to use it.

Mara Keisling, executive director of the National Center for Transgender Equality, said that she was grateful to DeVos for devoting two hours of her time to the meeting. “I think decision makers should meet the people they are deciding about.”

At the same time Keisling said rescinding the bathroom guidance was “extremely harmful” and urged DeVos to take steps to undo the harm and increase protections for transgender children.

DeVos said she was glad to meet with transgender families and hopes to continue the dialogue.

“Every school and every school leader has a moral responsibility to protect all students and ensure every child is respected and can learn in an accepting environment,” DeVos said in a statement. “I remain committed to advocating for and fighting on behalf of all students.”