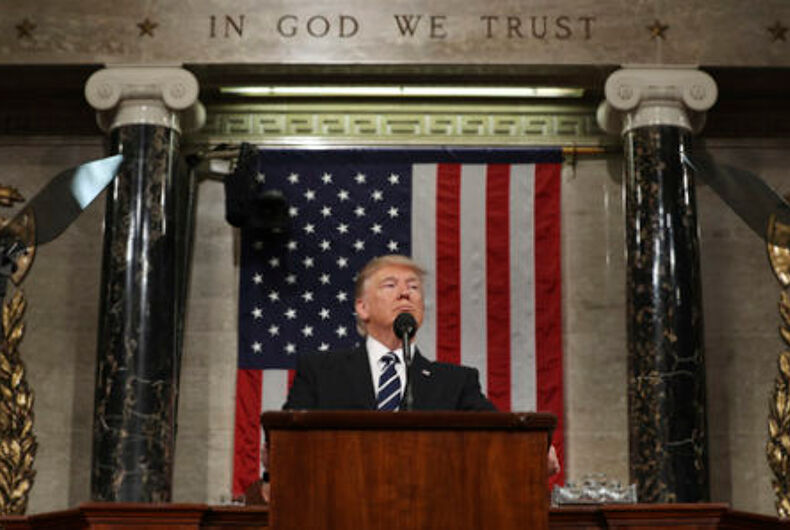 The saga of the Donald Trump executive order for “religious freedom,” which would allow for the discrimination of LGBTQ people and others on the basis of a firmly held belief, continues.

The American Civil Liberties Union (ACLU) filed Freedom of Information Act requests on Friday with the Departments of Health and Human Services, Labor, Justice, and Treasury, seeking any “communications regarding the drafting of an executive order that would attempt to grant broad religious exemptions to organizations from rules barring discrimination.”

“The American people deserve to know whether this administration plans to protect the rights of all Americans or whether it will sanction discrimination,” said Louise Melling, deputy legal director for the ACLU. “The ACLU fights every day to defend religious freedom, but religious freedom does not mean the right to discriminate against or harm others. If President Trump signs an executive order that authorizes discrimination against women and LGBT people, we will see him in court.”

After we broke the story of the rumored executive order, two separate drafts were leaked, one by The Nation and one by LGBTQ Nation, both showing a picture even worse than feared. The executive order would allow for discrimination across the board, in areas such as healthcare, housing, employment and private business, for those objecting to same-sex marriage and parenting, premarital sex, abortion and transgender identity.

While sources claim Trump’s daughter Ivanka and son-in-law and adviser Jared Kushner squashed the order, those close to the administration, such as Tony Perkins, Ken Blackwell and an anonymous source in the Cabinet, claim that it is still coming.

Blackwell, who was a member of the Trump transition team, said it is being worked on by lawyers to make sure it can pass legal scrutiny.

“The White House denied that it would issue the leaked version of the executive order, but it did not denounce the leaked executed order, leaving the door open to future attacks against LGBT people, people seeking reproductive health care, women, and religious minorities,” writes Brigitte Amiri, a Senior Staff Attorney at the ACLU’s Reproductive Freedom Project, for Common Dreams. “At the ACLU, we fight every day to defend religious freedom, but religious beliefs cannot be used to discriminate against or harm others.”

“Things may look bleak, but we have reasons to be hopeful,” Amiri continues. “We still have the Bill of Rights and all of you to make sure its words are much more than just scribblings on paper. We’ll see Trump in court, and we’ll join you in the streets. Together we will fight discriminatory policies and continue our work fighting for the rights of all Americans.”

5 foolproof ways to stay healthy, strong & prepared for your next adventure