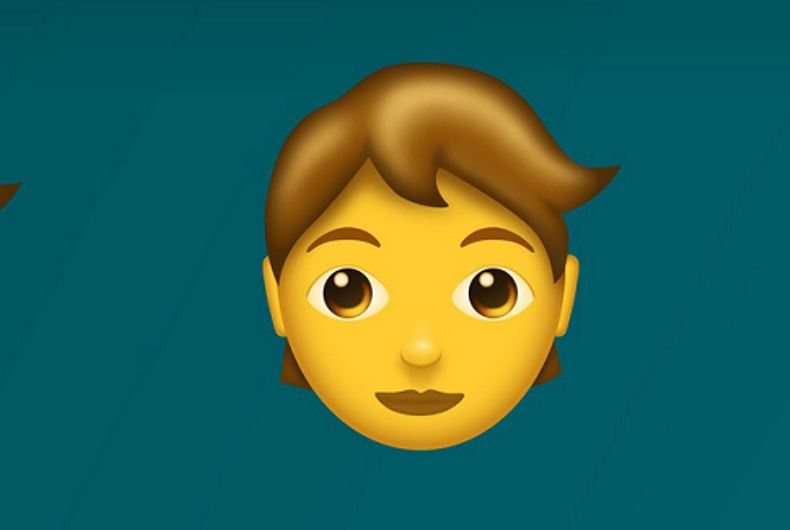 Mashable reports that there are currently no emoji for people who identify outside the gender binary, and that the Unicode Consortium is considering a proposal to include three emoji with “gender inclusive visual attributes.” The emoji would be a child, an adult, and an older adult.

Paul Hunt, a typeface designer at Adobe, made the proposal for Unicodes’s Emoji Version 5.0 “in order to provide better representation for people who want to express themselves in emoji as exactly that: just people.”

Hunt wrote in a blog post: “Not everyone identifies as male or female. Some of us identify as a bit of both, or neither, or something else altogether. Regardless of your gender identity, I hope we can all find adequate ways to express ourselves in emoji.”

According to Hunt, emoji used to be non-gendered due to low resolution displays on phones. Hunt wrote in a blog post that this changed in 2007 when the iPhone’s resolution could include gendered attributes.

One aspect of this added detail was to give explicit gender to many emoji characters that were previously agender or ambiguously gendered in other emoji sets. Apple’s police officer and construction worker became men. Its characters receiving ? haircuts and ? massages became women.

Google tried to remedy this inclusion of sexist stereotypes by allowing two gendered options. Emoji have becomes more diverse with the addition of features like beards and headscarves. And now Hunt is working to make a non-binary option available.

Founder of Emojipedia Jeremy Burge told Mashable, “While it’s not possible to include an emoji for every human appearance, I’m in favour of seeing more people have choices that represent them!”

This Ellen superfan made his dream come true: appearing on her show (sort of)