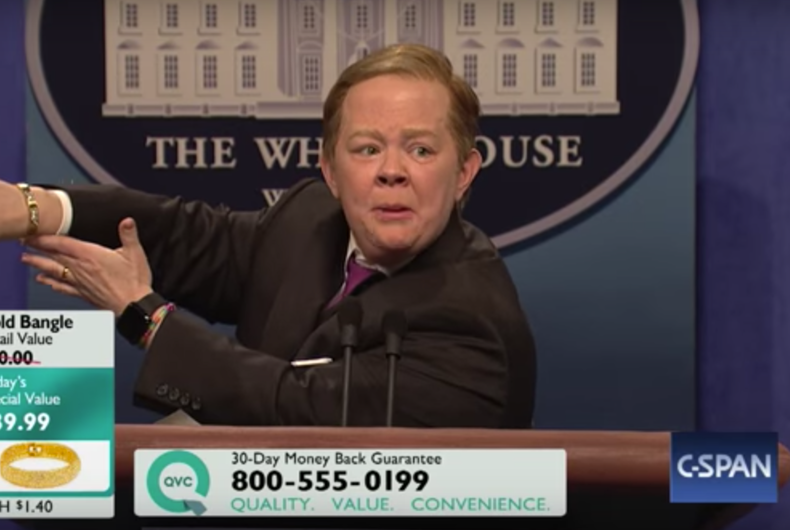 In the cold open, McCarthy’s Spicer reassures the press room, “I’m calm now,” before nearly calling the reporters “sons of bitches” during the briefing. Perhaps the outburst is due to gum withdrawals, as McCarthy notes he’s cutting back.

The press secretary’s fondness for props makes another appearance, as McCarthy uses Barbie and G.I. Joe dolls to explain what “extreme vetting.”

“We know she’s ok because she’s blonde. So she gets in,” McCarthy says. “Now who’s up next? Uh oh, it’s Moana. Whoa, slow your roll, honey. And then we’re gonna pat her down, and we’re gonna read her emails, and if we don’t like the answer — which we won’t — boom! Guantanamo Bay.”

McCarthy also tackles Spicer’s recent “Bowling Green Massacre” moment in which he referred to a non-existent terrorist attack in Atlanta multiple times — apparently intending to reference to Orlando massacre — as well as the list of terror attacks allegedly unreported by the media.

“The Bowling Green Massacre — the real one, not the Kellyanne one — the horror at Six Flags, the slaughter at Fraggle Rock, the night they drove old Dixie down,” McCarthy begins. “And then there was some light terrorism this week when Nordstrom decided to stop selling Ivanka Trump’s line of clothing and accessories.”

While we didn’t get to see Rosie O’Donnell as Steve Bannon, Kate McKinnon made an appearance as Attorney General Jeff Sessions (in addition to bringing back her Conway impression).

“We all know there are two kinds of crime — regular and black,” Sessions says before getting pulled off stage.

McCarthy’s Spicer bumbles through false statistics about the crime rate in Chicago — “80 percent of the people have been murdered!” — and when challenged by a reporter, uses a leaf blower to “[blow] away their dishonesty.”

Watch the full cold open below.

Polygamous families protest bigamy law in Utah: ‘If we were gay, we’d be OK’