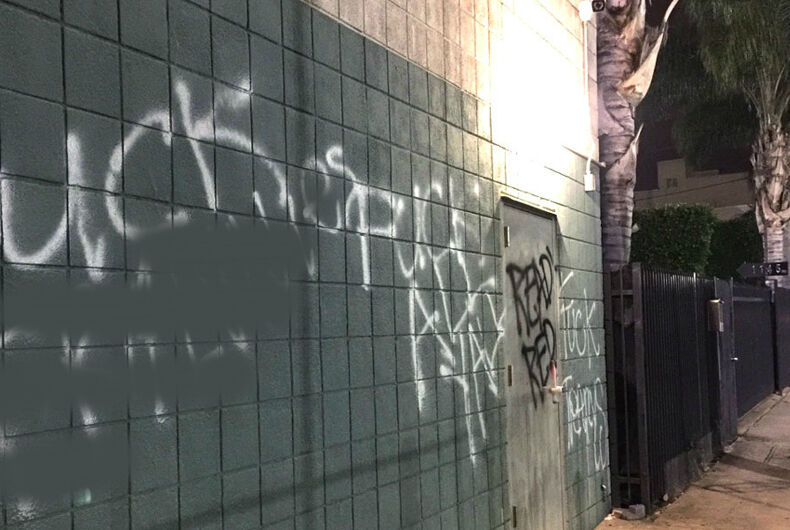 Workers at the Los Angeles LGBT Center arrived Friday to find the worst case of vandalism in recent memory: slurs like “Fuck trannies” and “Fuck all yall” spray-painted across the entire side of one wall of the Hollywood facility.

“It happened sometime between 9 and 10 pm last night,” Jackie DeFede, Director of Facilities at the Center told Vanguard Now. “We had a security officer on duty, but he was patrolling other areas of the building. Fortunately, we have cameras that should have recorded the perpetrators.”

After photographing the evidence, the team got to work removing the painted slurs at The Village at Ed Gould Plaza, near Santa Monica Blvd. and Highland Ave. DeFede said the incident would be reported to police.

And this was not the only LGBTQ center targeted for hate this week: vandals hit the Diverse & Resilient Center in the Riverside suburb of Milwaukee for the third time in two months.

“We already cleaned up some paint yesterday. There was quite a bit more on the windows and that was pretty easy to get off. Now, we are cleaning up the paint on the building,” said Gerald Coon, the president of Diverse & Resilient.

“The words are shocking and disturbing but at the same time being in the LGBT community we understand people don’t like us.”

Watch a report from WTMJ by clicking here.