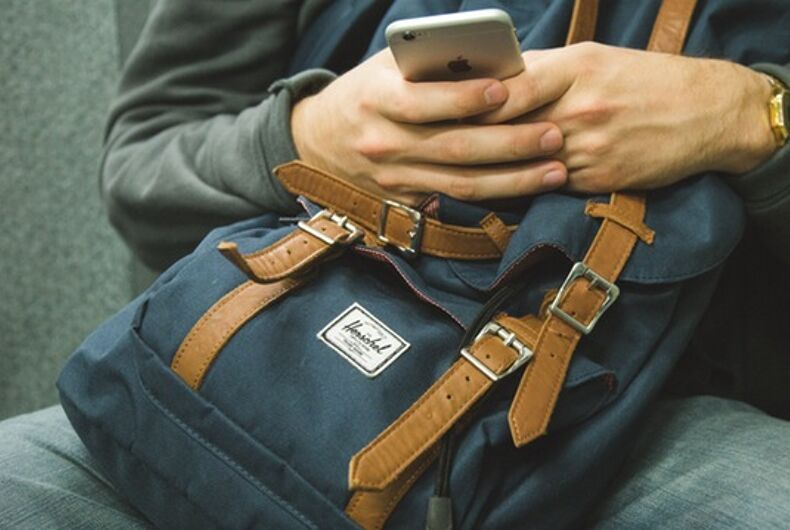 Since President Donald Trump signed his executive order temporarily banning refugees and travelers from seven Muslim-majority countries, reports of people being detained at the border over the contents of their cell phones have increased. But border agents have been profiling visitors based on the content of their cell phones since before Trump took office.

A gay Canadian recently told Daily Xtra that he was twice barred from entering the United States last fall after U.S. Customs agents read his Scruff profile and decided he was a sex worker.

André, who declined to use his last name for fear of retaliation, works as a set decorator in Vancouver and was trying to visit his boyfriend in New Orleans last October when he was selected for additional screening. During that screening, agents searched his cell phone, finding his profiles on hookup sites including Scruff and BBRT. He told Daily Xtra that the agents saw a reference to “looking for loads” in his messages and assumed it was a reference to prostitution.

“I didn’t know what to do. I was scared, so I gave them the password and then I sat there for at least an hour or two. I missed my flight,” André said. “He came back and just started grilling me. ‘Is this your email?’ and it was an email attached to a Craigslist account for sex ads. He asked me, ‘Is this your account on Scruff? Is this you on BBRT?’ I was like, ‘Yes, this is me.’”

Aside from being “humiliating,” André said the allegation wasn’t true. But despite his best efforts to explain, the agents were unpersuaded, and he forfeited his flight.

When he tried again a month later, he brought what he thought would be ample documentation of his legal employment, including letters from his employer, pay stubs, and bank statements. But he’d already been flagged in the system as a sex worker, André explained, and his efforts to clear his phone of anything that could be misinterpreted made him look more suspicious.

“They said, ‘Next time you come through, don’t have a cleared phone,’ and that was it. I wasn’t let through,” André said. “He said I’m a suspected escort. You can’t really argue with them because you’re trapped.”

Unlike the Canadian Muslim blocked from entering the U.S. over Arabic prayers on her phone or the U.S.-born NASA engineer with a “foreign” last name forced to hand over a government-issued phone containing classified information, André border troubles cannot be tied to Trump’s travel ban.

But taken in concert with these more recent events, André’s story serves as a reminder that anyone’s phone can be searched at the border, and heightened screenings can catch innocent travelers of all stripes in their net. While U.S. citizens will ultimately be allowed to enter, their phones and electronic devices are still subject to search and seizure at the border. And non-citizens can be turned away for refusing to allow their devices to be searched — or apparently for having a wide range of content U.S. Customs agents consider suspect.

“This is outrageous. He should file a complaint,” Davidson said. “Their agents need cultural awareness training to not misunderstand that people who simply are leading a normal sex life are not prostitutes.”

Scruff CEO Eric Silverberg said people who use the app may want to delete it from their phone before going through customs. While Customs and Border Protection agents have broad latitude to search travelers, removing sensitive apps, messages, photos, and other content before traveling can reduce the risk of being flagged as a risk.

“For Scruff members traveling to a country that may demand access to profiles and social media apps before entry, simply deleting the app and reinstalling upon re-entry is always an option.Scruff synchronizes your profile to the cloud, so after reinstalling you may login to regain access to your messages, favourites, albums, etc.” Silverberg explained. “That said, the best defense against unwarranted searches and seizures by the government is to work to elect leaders who share these ideals and values.”