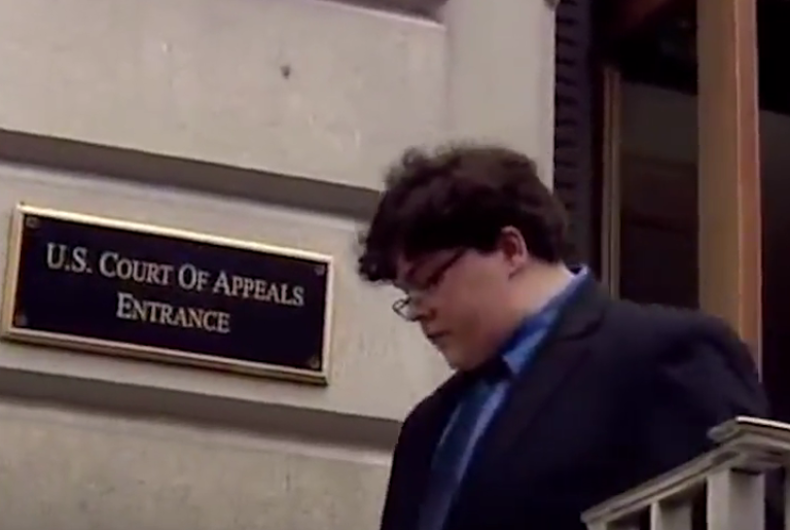 Gavin Grimm has been fighting for the right to use the correct bathroom at school for years.Photo: Screenshot

Several rightwing advocacy groups were caught violating the rules of the Supreme Court in an attempt to mis-gender Gavin Grimm.

Grimm, who was barred by his town’s school board from using the correct bathroom and told to use a janitor’s closet, is suing his school district under Title IX of the Education Amendments of 1972, which bans sex discrimination. The case is headed to the Supreme Court, and it has attracted the attention of many advocacy groups, many of which have filed amicus briefs in support of or opposition to transgender rights.

Since Grimm is a minor (age 17), the briefs must refer to him in this manner:

G. G., BY HIS NEXT FRIEND AND MOTHER, DEIRDRE GRIMM

The National Organization for Marriage and the Liberty Counsel filed briefs with this on the cover:

G. G., BY HER NEXT FRIEND AND MOTHER, DEIRDRE GRIMM

The conservative groups, of course, don’t want to acknowledge Grimm’s gender. While their anti-transgender rights arguments usually focus on sexual assault, federalism, and “religious freedom,” it’s just subterfuge for antipathy and an attempt to deny other people’s right to exist.

A spokesperson for the Liberty Counsel told Slate, “Gavin Grimm is a biological girl who now says she subjectively ‘identifies’ as a ‘boy.'”

The transphobic organizations’ covers violate Rule 34 of the Supreme Court Rules. As a result, the Liberty Counsel received this letter from a Supreme Court Clerk:

It has come to the attention of this office that the cover of your amicus brief in this case identifies the respondent as “G.G., by her next friend and mother, Deirdre Grimm.” In fact, the caption for the case in this Court, as in the lower courts, identifies the respondent as “G.G., by his Next Friend and Mother, Deirdre Grimm.” (Emphasis added.) Under Rule 34, your cover is to reflect the caption of the case. Please ensure careful compliance with this requirement in this and other cases in the future.

It may not seem that big in the grand scheme of things, but mislabeling a brief to the Supreme Court for no reason other than spite, in a case where someone is claiming that they’re being discriminated against for no good reason, isn’t a smart move.