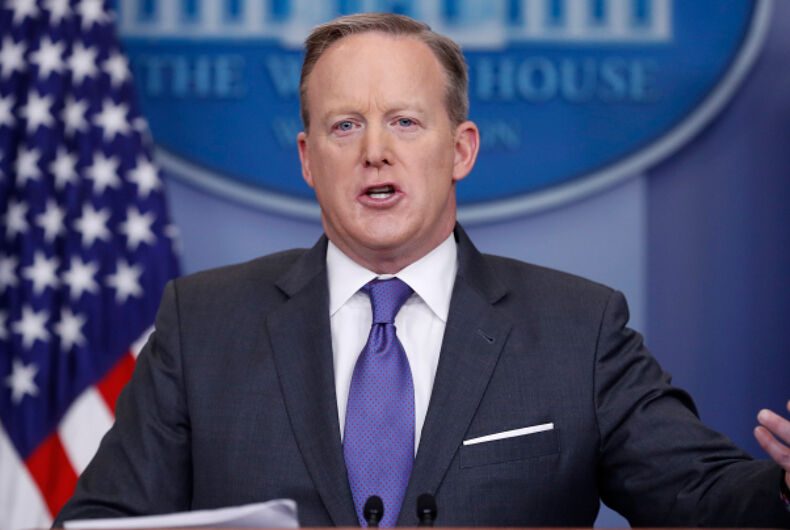 Fresh off adviser Kellyanne Conway repeatedly talking about a massacre in Bowling Green that never occurred, we now have an imaginary attack in Atlanta to contend with, thanks to Press Secretary Sean Spicer.

Over the course of two days, on three separate occasions, Spicer listed off cities where terrorist attacks have occurred in defense of President Trump’s travel ban affecting seven Muslim majority countries, saying all one needed to do was ask the families of the victims of these attacks whether or not we need to do more.

His choice of cities was the same each time: San Bernardino, Boston, and Atlanta.

There have been no terrorist attacks in Atlanta other than bombings carried out in the 1990s by Eric Rudolph, who was born in Florida, had no foreign ties, and whose violence was motivated by anti-gay and anti-abortion views.

The Daily Beast broke the story, and asked the White House for comment, which they did not receive. Neither did CNN when they wrote their version of the story.

The White House eventually released a statement via email to ABC News, saying Spicer “clearly meant Orlando” when he said Atlanta those three times: once on ABC, once on MSNBC, and during a White House press briefing.

The shooting at the LGBTQ nightclub Pulse in Orlando was the deadliest in modern history, claiming the lives of 49 people and injuring dozens more. The attack was carried out by Omar Mateen, who was born in New York of Afghan parents.

Mateen, like those responsible for the Boston and San Bernardino attacks, self-radicalized while living in America and had no direct ties to any terrorist organization, though they did claim to be inspired by them.

Trump has claimed that the media is not covering terrorist attacks, prompting Spicer to claim he meant that they were being “unreported” not “unreported,” and the White House released a list of 78 attacks they said were not given adequate coverage.

The attack on Pulse was included on that list.

Politifact rated the claim that the attacks weren’t being covered “pants on fire,” and media outlets seemed to take great glee in proving their extensive coverage of the events listed.