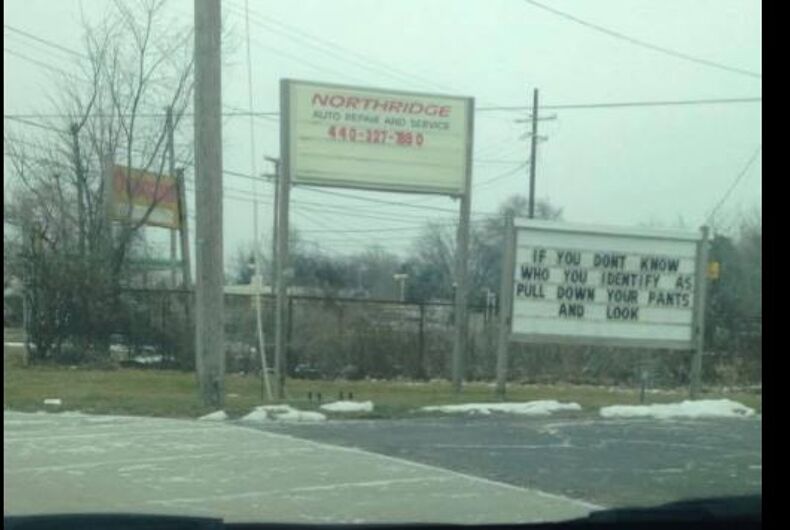 An Ohio politician is using a sign in front of his business to attack transgender people.

The sign sits at the business of Jay Linn, city council president in Olmsted Falls, and is just four miles from where a trans woman was brutally murdered in 2013.

“If you don’t know who you identify as pull your pants down and look,” reads the sign in front of Linn’s Northridge Auto Repair and Service.

Linn, a Republican Trump supporter, says he doesn’t care who he offends. He tells The Chronicle that he has a gay brother who lives in Michigan with his partner of 39 years.

“I don’t share his views in sexuality, and he doesn’t share mine. But we’re brothers,” he said.

His business sits just four miles from where Cemia Dove was stabbed 40 times by a man who found out she was transgender. He dumped her body into a pond near where he lived.

This isn’t the first time Linn has used his signage for right-wing politicking, but this is his favorite and he credits it with earning him some new business.

“I have to tell you this is the best sign I’ve ever had,” Linn said. “There’s been 30 or 40 people who have stopped in today, taken business cards and told me what great signs I do. They’ve stopped in, shook our hands and said keep up the great work. A couple made appointments for cars.”

A pair of retired teachers, Kari Foreman and Richard Gast, stood outside with signs protesting the message on Friday.

“I can accept political signs, but I cannot accept blatant discrimination and ignorance,” said Gast, who called the sign “terrible.”

“This one just pushed me over the edge. The present political climate is what’s allowing people like him to do these things and think it’s OK,” he added.

“I had students in the LGBT community and I have dear friends as well,” Foreman said. “To say nothing is to tolerate hate, in my opinion.”

Last year was the deadliest on record for transgender individuals.