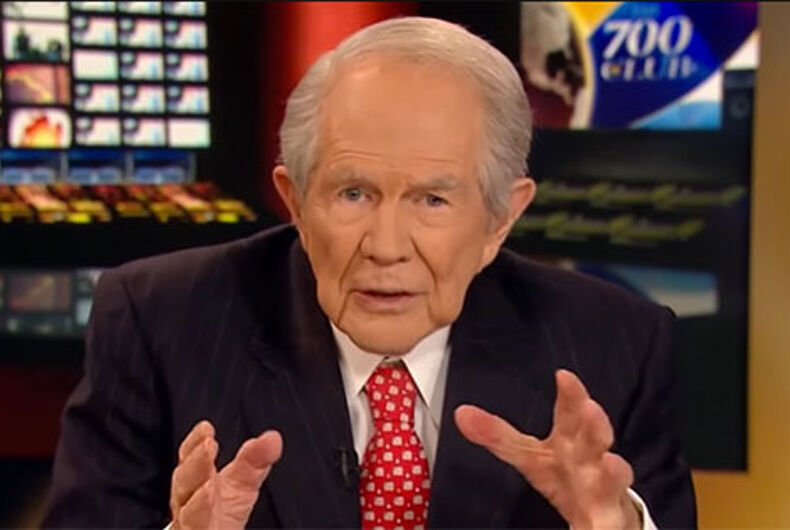 Conservative Christian televangelist Pat Robertson told viewers of his 700 Club program that “left-wingers and so-called progressives” opposed to the president “are not only revolting against Trump, they’re revolting against what God’s plan is for America.”

Right Wing Watch reported Robertson believed that President Obama, Democrats, liberal government officials and members of the media had concocted a plot against President Donald Trump, and that he believed they were working to take down former National Security Adviser Michael Flynn and damage the Trump administration. This was prior to this week’s stunning resignation by Flynn after being exposed for lying to Vice President Mike Pence about his contact with Russia’s foreign ambassador.

But it was Robertson’s claim that those challenging Trump are really fighting against God:

“I think, somehow, the Lord’s plan is being put in place for America and these people are not only revolting against Trump, they’re revolting against what God’s plan is for America. These other people have been trying to destroy America. These left-wingers and so-called progressives are trying to destroy the country that we love and take away the freedoms they love. They want collectivism. They want socialism. What we’re looking at is free markets and freedom from this terrible, overarching bureaucracy. They want to fight as much as they can but I think the good news is the Bible says, “He that sits in the heavens will laugh them to scorn,” and I think that Trump’s someone on his side that is a lot more powerful than the media.”

Watch the clip below from Right Wing Watch:

Will Montana pass an inclusive nondiscrimination law this year?