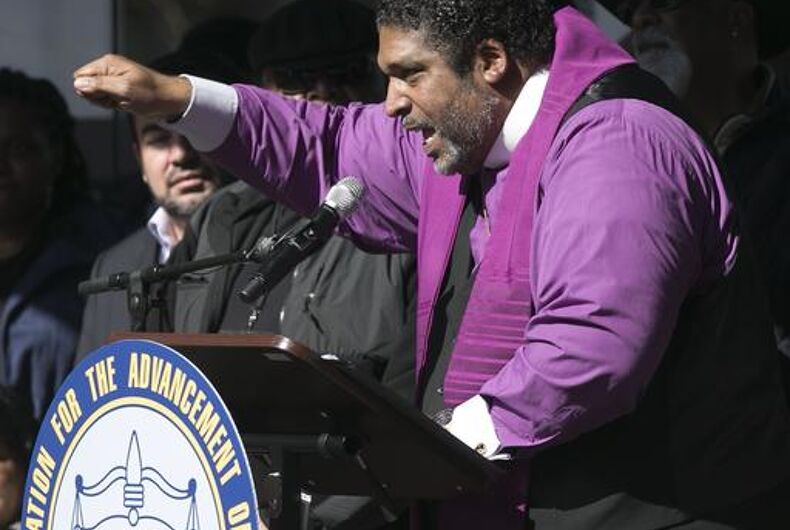 Rev. William Barber speaks during the annual “Historic Thousands on Jones Street" (HKonJ) march in Raleigh, N.C., on Saturday, Feb. 11, 2017. The rally was organized to express support for the Affordable Care Act, opposition to President Donald Trump’s plans to build a wall along the border with Mexico and his executive order on immigration. Photo: Robert Willett/The News & Observer via AP

RALEIGH, N.C. (AP) — A massive crowd attended Saturday’s annual civil rights rally in North Carolina’s capital, beefed up by protesters energized in opposition to President Donald Trump and to a state law limiting LGBT rights and which public bathrooms transgender people can use.

Organizers of the “Moral March on Raleigh,” led by the state chapter of the NAACP, has largely focused on state government during its 11 years of existence, more recently against the conservative-leaning agenda Republicans have implemented.

Saturday, however, had a more national emphasis, particularly with the arrival of Trump in the White House. Speakers at the end of the downtown march near the old Capitol Building lamented Trump’s support to repeal President Barack Obama’s signature health care overhaul and Trump’s hard-line stance on immigration.

Trump last month signed an executive order that barred anyone from seven Muslim-majority countries for 90 days. Although a federal court has blocked its enforcement, marchers kept the issue front and center by chanting “No hate, no fear, refugees are welcome here.”

“I think it’s a shame,” said Laurence Brunet, 30, a Canadian researcher living in Carrboro for just over a year. “Any country is so stronger if we just accept everyone.”

“People cannot stand the things that Trump supports and are appalled and I think that’s the big driving force,” said protester Dan Zachary, 54, of Chapel Hill, while also holding a sign urging the repeal of the state law known as House Bill 2. “It’s unsustainable. It’s unfair to human beings.”

While North Carolina’s economy continues to improve after the Great Recession, the national fallout over the law has damaged the state’s brand and caused some companies not to expand in the state. A repeal agreement fell apart in December amid partisan acrimony.

“There’s a lot of stuff going on that is really not fair to a lot of people,” said Williamson, 20, an N.C. State student who identifies herself as queer.

The Rev. William Barber, state NAACP president and the driving force behind the rally, portrayed Trump’s election as a right-wing response to recent expansions of equality and justice. Barber used the biblical story of three Hebrew children who refused to bow down to a king at the risk of being thrown into a furnace to urge the crowd to stay strong.

“Bowing down and standing down is not an option,” Barber said. He announced local marches at the offices of North Carolina’s congressional delegation later this month and a lobbying day at the Legislative Building in March.

State Republican Party Executive Director Dallas Woodhouse said in an email the agenda supported by the march organizers would create “bigger and more expansive government, higher taxes and fewer jobs in North Carolina” and “does not represent the agenda of most North Carolinians.”

Republicans have performed well in state elections since 2010, but Barber said the movement made strides in 2016 with Democratic Roy Cooper’s victory over McCrory and the election of a black judge to the state Supreme Court.

A rally speaker announced the crowd exceeded the total in 2014, when people took up three blocks of Fayetteville Street. Saturday’s crowd filled much of the third block as the final marchers arrived.