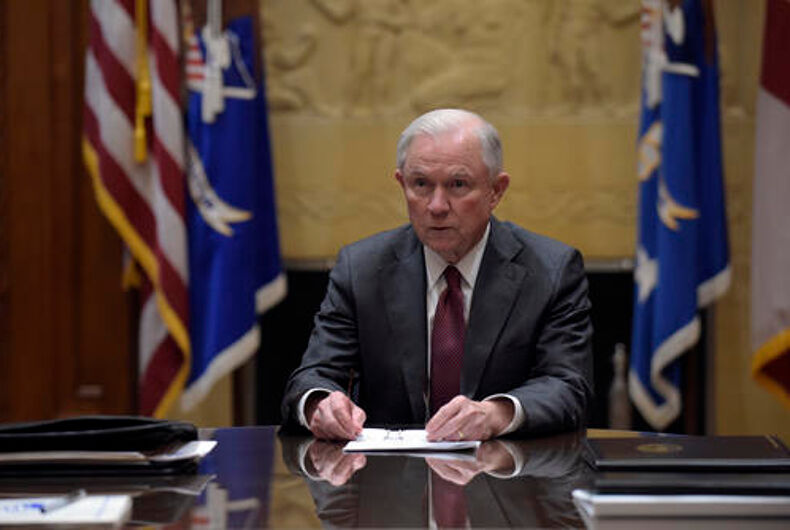 FILE - In this Feb. 9, 2017, file photo, Attorney General Jeff Sessions holds a meeting with the heads of federal law enforcement components at the Department of Justice in Washington. When President Donald Trump spoke to the National Prayer Breakfast this month, he underscored his vow to defend the religious rights of the conservative Christians who helped propel him to power. Now, they expect the Justice Department under Sessions will reposition itself as a champion of what they see as that religious freedom. Photo: (AP Photo/Susan Walsh, Pool)

WASHINGTON (AP) — When President Donald Trump spoke to the National Prayer Breakfast this month, he underscored his vow to defend the religious rights of the conservative Christians who helped propel him to power.

Now, they expect the Justice Department under new Attorney General Jeff Sessions will reposition itself as a champion of what they see as that religious freedom.

It would be a welcome change for conservative Christians who say their concerns were marginalized under the Obama administration in favor of First Amendment and LGBT issues.

Exactly how Sessions will approach the issue remains to be seen, but he has given them plenty of reasons to be hopeful.

Asked at his confirmation hearing whether a “secular person” has “just as good a claim to understanding the truth as a person who is religious,” Sessions replied, “Well. I’m not sure.”

That backdrop suggests Sessions’ Justice Department could more eagerly insert itself into religion-oriented cases such as that of the bakery fined for refusing to make a gay wedding cake, or the high-school football coach fired for praying on the field after games, who Trump repeatedly mentioned during his campaign.

“Religious conservatives have sort of been the forgotten people,” said Hiram Sasser, deputy chief counsel for First Liberty Institute, a law firm that specializes in issues of religious liberty. “Now, we have a refreshing sort of reboot to be able to have at least a voice, and to be able to once again have a seat at the table.”

Sessions could bring major changes throughout the Justice Department. But the department’s civil rights division traditionally is subject to the most radical shift in agendas with each change in presidential administration. Where the Obama Justice Department wanted to leave its mark on reforming troubled police departments, Sessions will likely use its resources differently.

On his first full day on the job, Sessions signaled a shift away from Obama priorities when the Justice Department changed its legal position in a case involving transgender rights. The department is no longer asking a judge to limit an injunction restricting the federal government from telling schools that students should be able to use bathrooms and locker rooms corresponding to their gender identity.

Transgender rights were a focus of the department under former Attorney General Loretta Lynch, who sued the state of North Carolina over a bathroom bill that the government said discriminated against transgender people. Such a move would be improbable in an administration like Trump’s, which has already signaled its deference to states’ rights.

It’s unclear exactly what priorities Sessions will pursue when it comes to the civil rights division. The Justice Department declined to comment on his plans for enforcement of religious freedom. He has faced intense criticism of his record on civil rights with regard to race.

A renewed focus on religious causes would be “especially troubling in light of the fact that increasing numbers of Americans are not religious,” said Marci Hamilton, a Yeshiva University legal expert on religious liberty. “This landscape is radically different.”

But it would help satisfy Trump’s campaign promise to his Christian political base. While the appointment of Sessions is a promise fulfilled, some religious conservatives remain concerned that Trump won’t deliver. When he was Indiana’s governor, Vice President Mike Pence signed a religious freedom law but softened it after criticism that it was discriminatory, a move that disappointed some conservatives.

Trump still has not signed an executive order to boost protections for those with religious objections to gay marriage and create a working group within the Justice Department to protect “the religious freedom of persons and religious organizations.”

Groups ranging from the U.S. Conference of Catholic Bishops to Sasser’s First Liberty Institute have launched campaigns urging Trump to enact broad protections for religious objectors to laws such as gay marriage and abortion.

The department could insert itself in federal lawsuits on behalf of faith-based groups, among other actions. It could aggressively enforce the provision of the Civil Rights Act that bans workplace bias based on religion, and also a law designed to let churches and other religious institutions skirt zoning restrictions, which the Obama administration used to sued several cities that refused to allow the construction of mosques.