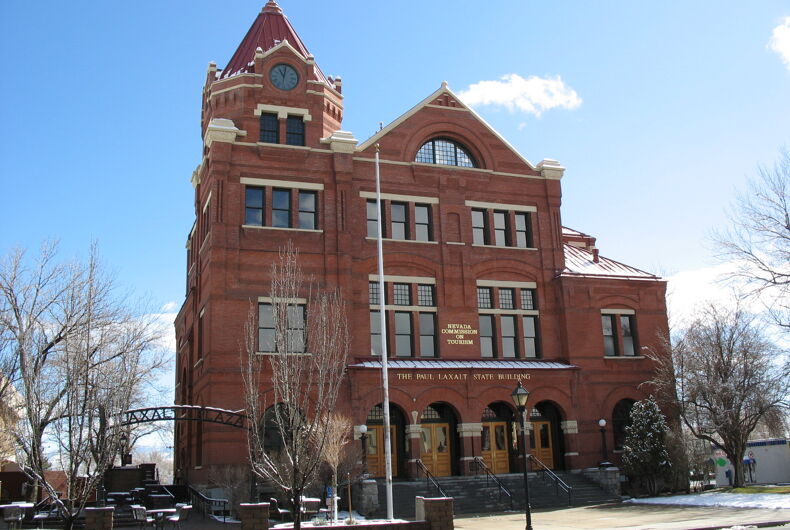 CARSON CITY, Nev. (AP) — While some states debate ways to limit how gay couples benefit from the national legalization of same-sex marriage, Nevada became the latest state to take aim at the last vestiges of defining marriage as a union between a man and a woman.

Joined by gay couples and their families, Democratic lawmakers back in control of the Nevada Legislature want to delete a now-defunct gay marriage ban in the Nevada Constitution.

The U.S. Supreme Court decided in June 2015 that failing to provide or recognize gay marriages violates rights to due process and equal protection.

Pam Roberts, who spoke in support of the bill and was accompanied by her wife and two sons at a legislative hearing Tuesday, said keeping the ban language means Nevada would automatically reinstate the discriminatory policy should a conservative high court someday overturn the decision that Supreme Court justices approved 5-4.

More than that, Roberts said, it’s a slap in the face from the state where she chose to raise her kids and legally wed Gretchen Miller.

Thirty-one states had enacted laws banning same-sex marriage before the ruling, according to the National Conference of State Legislatures.

Most remain on the books, however invalid.

Legislators in North Dakota and Virginia recently rejected a proposal to change state law to reflect the Supreme Court ruling. Similar attempts have been made in another eight states, the NCSL said last year.

The Texas Supreme Court said last month it will take up a case to prohibit spouses of gay City of Houston employees from obtaining spousal benefits.

In Nevada, people defending the law say it preserves the Christian norms of marriage and gender identity, and deleting it could have ramifications for religious freedom.

Clark County Clerk Lynn Goya said religious officials can decline to marry people for any reason, whereas businesses primarily formed for the purpose of marrying people and that profit from it cannot refuse same-sex couples.

No action was taken on the Nevada proposal Tuesday. It would need to pass the biennial Legislature twice and get approval from voters before the provision could be deleted. The earliest it could go on a statewide ballot would be in 2020.

© 2017, Associated Press, All Rights Reserved.
This material may not be published, broadcast, rewritten, or redistributed.
News
Nevada, Pam Roberts

Government money used to pay for gay clubs with backrooms