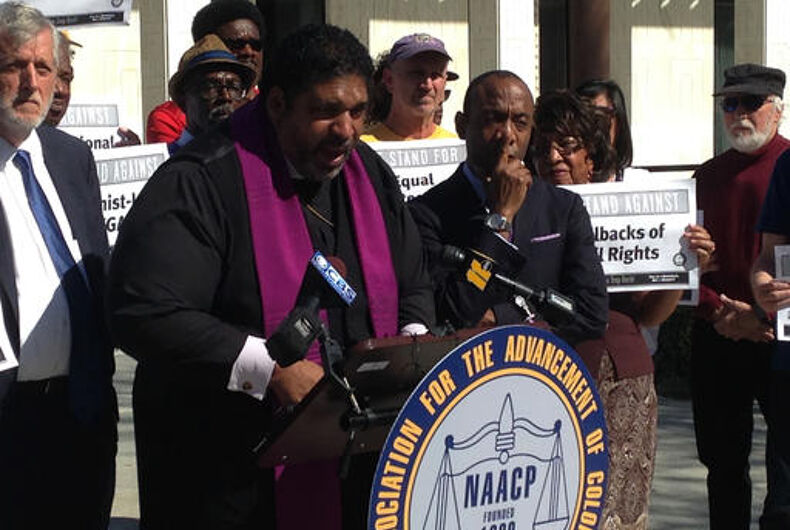 North Carolina's NAACP leader The Rev. William Barber speaks at a news conference on Friday, Feb. 24, 2016, in Raleigh, N.C., while the national NAACP president Cornell Brooks looks on. The two were announcing the first steps in a national economic boycott of the state over conservative policies including a law limiting LGBT rights. (AP Photo/Jonathan Drew)Photo: The Associated Press

RALEIGH, N.C. (AP) — An economic boycott by the NAACP is the latest fallout over North Carolina’s so-called bathroom bill and other conservative policies.

The civil rights organization urged religious conferences, athletic events and musicians Friday to take their business elsewhere. They cited a state law that limits protections for LGBT people as well as ongoing legal fights over voting rights. The group stopped short of telling its members to cease all travel and spending in North Carolina — a component of previous boycotts — but said it might add other economic measures later.

The NAACP’s national president Cornell Brooks also warned that the group would consider similar actions in any other state that seeks to limit voting access or pass discriminatory laws, calling the use of boycotting “a serious matter.”

“The NAACP does not take this matter cavalierly,” he said.

North Carolina has been at the center of the transgender rights debate because of the state law that says transgender people must use restrooms corresponding to the sex on their birth certificate in many public buildings.

“Right now in the state of North Carolina we have children — Dear God, children! — who are being imperiled, who face the prospect of being bullied as a consequence of politicians using them as political pawns while we talk about bathrooms,” Brooks said.

The Rev. William Barber, who leads the state’s NAACP chapter, proposed the boycott late last year after a deal fell apart to repeal the law, often referred to as House Bill 2, which also excludes gender identity and sexual orientation from statewide antidiscrimination protections.

But Barber stressed that the boycott would also pressure the Republican-controlled legislature over efforts to limit the new Democratic governor’s power as well as legal battles over voting rights and how electoral districts are drawn.

“What has happened in North Carolina makes this state a battleground … for the soul of America,” said Barber, who has drawn thousands to rallies protesting conservative policies in recent years.

The NAACP was part of a coalition that successfully sued to overturn much of a 2013 North Carolina elections law that required photo ID from voters who cast ballots in person. A federal appeals court said that provision and others disproportionately targeted black voters. Republicans have appealed to the U.S. Supreme Court.

Republican Senate leader Phil Berger called on Democratic Gov. Roy Cooper to “condemn William Barber’s attempt to inflict economic harm on our citizens, and work toward a reasonable compromise that keeps men out of women’s bathrooms.”

Asked about the boycott, Cooper’s spokesman Ford Porter said in an email: “While Governor Cooper continues to urge business to come to North Carolina in spite of HB2, Republican legislative leaders need to stop holding our economy hostage to this disastrous law.”

Brooks declined to offer further specifics or a timetable for deciding whether to escalate the effort, but suggested the group’s previous boycotts could serve as a model.

The NAACP boycotted South Carolina for 15 years over flying the Confederate battle flag on Statehouse grounds. When that boycott was approved, the group urged all of its members nationwide to avoid visiting or spending money in the state. The flag was removed in 2015.

Already, House Bill 2 has caused numerous conventions, concerts and sporting events to pull out of North Carolina, depriving it of hundreds of millions of dollars in economic impact. The state also lost several large-scale business projects with hundreds of jobs because of the law.