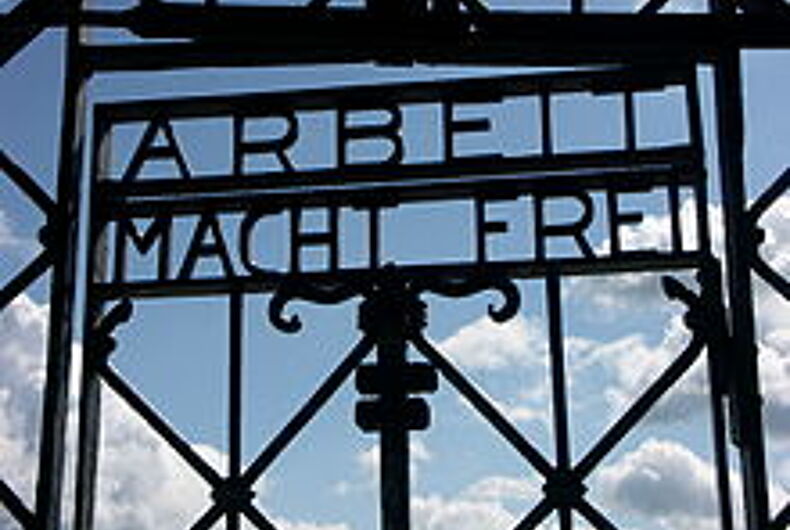 Dachau's entrance, which says "Work will make you free."Photo: Wikipedia

I don’t usually begin a commentary this way, but, as a queer person and as a Jew who lost multiple family members to murder during the German Holocaust, I feel so furious that I am having difficulty finding the words. What I saw and heard far exceeds mere hypocrisy and reaches into the inner depths of disgust, outrage, and contempt.

Vice President Mike Pence standing with the President of the European Council, Donald Tusk, at a joint press conference at the European Council in Brussels, Monday, February 20, began his statements by relating how very moved he was on his recent trip (and obvious photo op) with his wife and daughter as they visited the first Nazi concentration camp, Dachau, constructed in 1933.

They walked under the gate with the heinous words “Arbeit macht frei,” (“Work sets you free”) and were joined by Abba Naor, a survivor of the camps, along with other officials. The Pences laid a wreath beneath the International Memorial at the camp and witnessed the prisons’ barracks and the ovens inside the camp’s crematorium.

In Dachau alone, Nazis imprisoned and enslaved more than 200,000 and ultimately murdered approximately 40,000 people, and millions more throughout the Nazi realm that they defined as enemies of the state, race polluters, abject (cast off) “othered” bodies, those unworthy of life, many under the category of “inferior people” (Untermenschen): Jews, Slavs, non-Aryan emigrants, peoples of color, homosexuals, Jehovah’s Witnesses, Roma, Communists, people with disabilities, labor trade unionists, unemployed people (the “work shy”), people who performed abortions, and others.

I wonder whether Pence truly understands the events in Germany that led to the mass incarcerations and the genocide: the stereotyping of entire groups of people whom the Nazis scapegoated for causing the problems of the state.

I wonder whether Pence understands how his own administration, indeed, the Republican Party writ large has employed the tactics of stereotyping and scapegoating of the bodies of entire groups of people to use as stepping stones in their ascension to and maintenance of power: LGBTQ people, people of color, Muslims, immigrants, people with disabilities, feminists, pro-choice advocates, labor trade unionists who push for collective bargaining, those who understand the important role of government in health care and in maintaining a fundamental level of economic security, and yes, Jews.

Pence, as a member of Congress and later as Indiana Governor, has not been a friend to labor unions. During the election, according to Brett Voorhies, president of the Indiana State AFL-CIO:

Mike Pence has waged repeated attacks on working Hoosiers as governor and will without a doubt continue the attacks alongside his anti-worker running mate Donald Trump who is ‘100 percent right to work’ (anti-union and collective bargaining).’”

Trump figuratively spit in the faces of minoritized groups, in particular Mexican immigrants, during his off-scripted rambling announcement speech:

Trump eventually enlarged his dehumanizing representations to include people in all of Latin America and people in Muslim countries (except for those in who he has business interests).

Vice President Mike Pence, in his first congressional campaign in 2000, argued for public funding of so-called conversion therapy for LGBTQ people. On his website at the time, his disdain for same-sex attractions and sexuality stands out:

Let Us Not Repeat History

Though I rarely offer comparisons between events transpiring before and during the ascension to power of the German Third Reich with the contemporary United States – since to do so could trivialize one of the most horrific episodes in human history – nonetheless, I am haunted by certain parallels that demand attention.

I am troubled by multiple similarities between that time not so very long ago with the discourse expressed and events transpiring today. I want, therefore, to highlight, in particular, the parallels I see in Nazi portrayals and understandings of sex, sexuality, gender, and gender expression: a divisive and brutal program that was anti-feminist, anti-women’s equality, anti-women’s reproductive freedoms (anti-family planning, anti-contraception, anti-abortion), anti-lesbian, anti-gay, anti-bisexual, anti-transgender, anti-gender nonconforming, anti-sexuality education in schools.

For example, Alfred Rosenberg, one of the Nazi’s chief ideologues, directed his misogynist outrage by warning all women:

The emancipation of women from the women’s emancipation movement is the first demand of a female generation trying to rescue nation and race, the eternally unconscious, the foundation of all civilization, from decline…. [O]ne thing must be made clear: Only a man must be and remain judge, soldier, and politician.

Unnatural vice committed by two persons of the male sex or by people with animals is to be punished by imprisonment; the verdict may also include the loss of civil rights.”

Nazi ideology rested on the assessment that male homosexuals lowered the German birth rate; they endangered, recruited, enticed, and corrupted youth; that a possible homosexual epidemic could spread; that homosexuals are “potential oppositionists” and enemies of respectable society; and that sexual relations between people of the same sex impairs their “sense of shame” and undermines morality, which inevitably will bring about the “decline of social community.”

On the other hand, Heinrich Himmler, Gestapo head and chief architect of the Reich’s anti-homosexual campaign, justified his actions by arguing that male homosexuals were “like women” and therefore could not fight in any German war effort. Subsequently, he conducted surveillance operations on an estimated 90,000 suspected homosexuals, arrested approximately 50,000, and transported somewhere between 10,000 and 15,000 to several concentration camps throughout the Nazi dominion. Very few survived.

Hitler also proposed eliminating all sex education from the German school system and encouraged parents to take on the primary responsibilities for sex instruction within the home.

The Nazi regime connected multiple forms of oppression when Heinrich Himmler reorganized the Reich Criminal Police Bureau to centralize operations by creating a national file on male homosexuals, transgender people (referred as “transvestites”), what they referred to as “wage abortionists” (women and their doctors), and to monitor the production and ban the use of contraceptives to “Aryan” women.

Within this Bureau, they established The Reich Office for Combating Homosexuality and Abortion, which in the single year of 1938 alone conducted 28,366 arrests for abortion and 28, 882 arrests of male homosexuals.

The common thread running through Nazi ideology regarding sex, gender expression, and sexuality was their intense campaign to control individuals’ bodies and the bodies of members of entire communities in the attempt to control their minds.

Throughout history, examples abound of patriarchal domination over the rights and lives of women and LGBT people, who were constructed as second-class and even third-class citizens. This happened not merely in Nazi Germany, but is still happening today.

I wonder if Pence understands the irony in his journey through Dachau! If he sees the parallels of his own politics and the politics of the Republican Party, with those of the Nazis before they began their fanatical genocidal slaughter, then possibly something good may still come out of his visit.