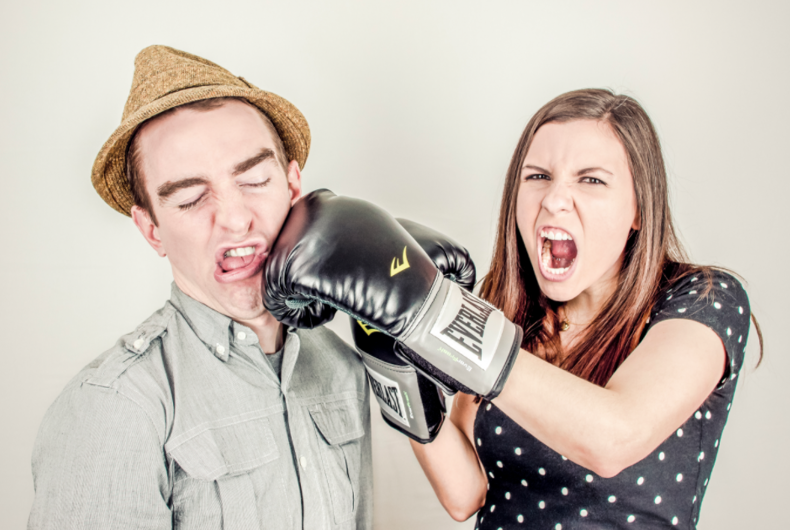 Scan the psychological literature and you will find numerous case studies of abused youth who grow to become abusers, and bullied tormented youth who eventually become tormentors themselves. On the other end of a wide continuum, other studies document such young people who eventually stop the cycle of abuse as adults — some who work to make the world a safer place for everyone, physically and psychologically.

How many times have we been, and continued to be, harassed and assaulted by bullies on the schoolyard, and scorned and reviled by those with social and political power who want to roll back the gains we have made over the years? If the current political climate is any indication, unless we commit to interrupting the trend on the personal, interpersonal, institutional, and larger societal levels, it will get even worse.

I cannot help but reflect on the psychological studies when I read some of the letters printed in our LGBTQ community and national publications, as well as messages on our internet chat rooms, blog sites, and email lists in which writers engage in vicious personal attacks, name calling, character assassination, and impugning of motives of other LGBTQ people and our allies with whom they disagree. It is as though these writers forget that there are actual human beings on the other end of the computer screen.

When reading the personal attacks against “our own,” I must ask myself, “Have some of us taken on the characteristics of our abusers by perpetuating the abuse? And what role does internalized oppression play in this equation?”

I have talked with several of our national and local LGBTQ leaders who have uniformly related to me that they have never been attacked in print as viciously by opponents from outside our communities as they have been by people from within our communities. It appears that we are virtually “eating our own.”

I am hearing of university professors — excellent educators — who have dedicated their lives to their students and their scholarship, who are leaving their chosen professions because they are experiencing angry attacks when they assign reading materials or they use terminology within their lectures that students don’t like.

Personally, on nearly every occasion when I post an article or commentary online, or share my educational materials – at no cost – to members of LGBTQ and other communities, though many comments are supportive, almost every time one or a few people impugn my character and attack my academic rigor.

Though I make it known that I am always open to constructive criticism in terms of making suggested changes, corrections, deletions, and additions when presented to me within an environment of civility, some people feel they have the right and are entitled to attack me because I may have made an error or that I perceive topics from a different vantage point.

Just one hour before writing this commentary, someone within the LGBTQ community accused me of being a narcissist in the ilk of Donald Trump, being an academic fraud, and being a “self-promoter” by uploading my articles, commentaries, and PowerPoint presentations onto websites and Facebook groups, rather than treat me as someone who wishes to share my work with others.

Though I am quite confident in the quality of my work, and am open to correcting any errors, I often wonder about writers and upcoming scholars who are not as experienced in the publishing process and the often-brutal internal criticism that invariably follows. How will that effect their self-concept and desire to continue moving forward in their important work?

A 2014 National Civility Survey by Weber Shandwick and Powell Tate, with KRC Research found that about 66 percent of U.S. citizens believe that we have “a major civility problem” in our country, and 70 percent believe that “civility has eroded over the past few years.”

The theocratic and political Right loudly warns of a so-called “Gay Agenda” that we are supposedly attempting to impose in the schools, in the houses of workshop, in the halls of Congress, and in the homes of “unsuspecting” citizens throughout this land. Though there may be some basic issues on which most of us agree, we comprise such a diverse community (actually many communities) — people with disparate views, social identities, political and religious affiliations, and people who are at all degrees of “outness” — that there is no possible way that we could ever propose and work toward a unified “agenda.”

Quite simply, I believe that sexual and gender identities alone are insufficient to link a community and by extension, an entire movement. And this is possibly how it should be.

Of course, we certainly can and should challenge one another when we disagree on views, actions, terminology, perceptions of history, and ways to move forward. If indeed it is true, as the old saying goes, that the fish is the last to see the water because it is so pervasive, then from our vantage point at the margins, we have a special opportunity — indeed a responsibility — to serve as social commentators, as critics, exposing and highlighting the wide-scale inequities (of all kinds) that dampen and saturate our environment, and to challenge the culture to move forever forward and to grow.

We have crossed a critical line, however, when we enter into character assassination, insinuation and innuendo, name-calling, stereotyping, defamation, and calling into question one another’s motives for the views and perspectives we hold. I don’t care if it is people within our own communities, of even members of the ultra-right, the president of our local school board, or the neighbor next door, we don’t have to employ the tactics or use the language of those whom we oppose.

I am sure there are those who would tell me, “Oh why don’t you simply grow up and join the real world?” My response is that I hope we can radically transform the so-called “real world” — for it is only real if we collude and buy into it as it is. The strategy I propose certainly will not entirely eliminate the venomous assaults lodged against us by those with whom we disagree, but it will undoubtedly help to maintain our sense of dignity and our integrity. We can, therefore, take a higher ground.

A central tenet of Jewish tradition is Tikkun Olam: meaning the transformation, healing, and repairing of the world so that it becomes a more just, peaceful, nurturing, and perfect place. I ask us to join and go out into our lives, and work for Tikkun Olam. Let the abuse stop here.