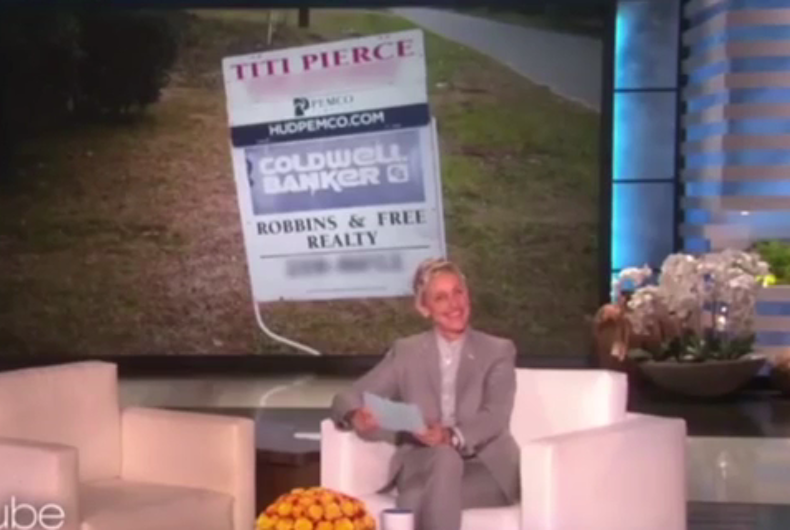 The segment involved making fun of signs and ads.Photo: Screenshot

A federal judge threw out a case brought against The Ellen Degeneres Show and Warner Brothers by a woman who said Ellen mispronounced her name.

The woman, a real estate agent from Georgia named Titi Pierce, claimed she was defamed in a February 2016 segment entitled “What’s Wrong With These Ads … and These Signs?”. In the segment, Ellen made fun of an ad Pierce ran and pronounced her first name like “titty.”

SF Gate reports that Pierce’s lawsuit stated, “Prior to defendant’s misdeeds, Ms. Pierce has been called only by her name ‘Titi,’ which, as grammar dictates, is pronounced ‘TEE TEE.'”

The judge, in throwing out the case on Wednesday, rejected the claim.

The title of the segment itself implies that there is something incorrect or entertaining about the forthcoming signs, and indicates that DeGeneres’ statements should not be taken literally. Nor could DeGeneres’s pronunciation be proven to be demonstrably false. The letter ‘i’ in the English language can be pronounced in several ways. While Plaintiff chooses to pronounce her name with ‘?”,’ there is nothing ‘demonstrably false’ in pronouncing it with ‘I’ as DeGeneres did. Nor would it have been defamatory to have pronounced Plaintiff’s name ‘tī-tī’ or ‘tĭ- tĭ,’ or any other possible permutation. That Plaintiff was insulted or embarrassed does not transform the different pronunciation into a false one.

…Furthermore, DeGeneres’ statement immediately succeeding her pronunciation of Plaintiff’s name, that she might have spent time in the Nipple Convalescent Home, could not reasonably be interpreted as stating or implying that Plaintiff did, in fact, spend time as such a home.

Producers of The Ellen Degeneres Show said in a statement, “We try to have fun every day and make people laugh and never intend to hurt anyone’s feelings.”