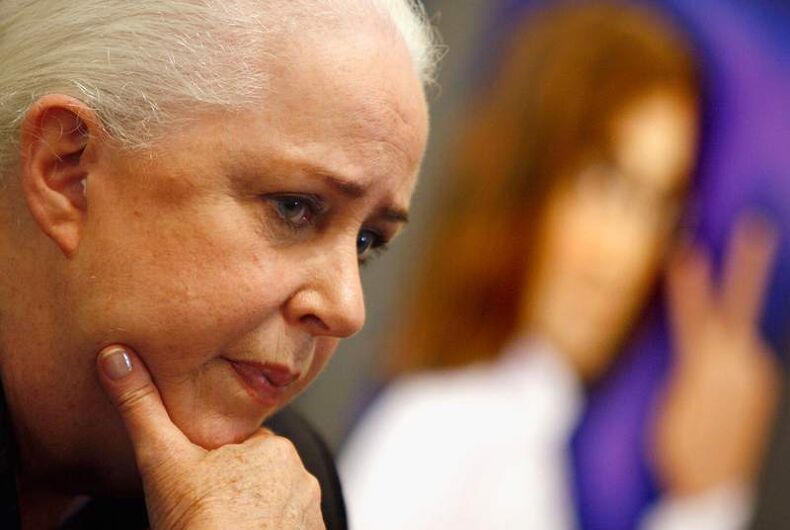 Former Jefferson Starship lead singer Grace Slick is not a fan of Chick-fil-A. The company, known for their involvement with religious right causes and support for anti-LGBTQ organizations, asked her for the rights to the song “Nothing’s Gonna Stop Us Now” for a commercial.

The foul mouthed singer wrote an essay for Forbes to explain why she decided to license the song to the fast food restaurant even though, as she said, “Chick-fil-A pisses me off.”

“I firmly believe that men should be able to marry men, and women women. I am passionately against anyone who would try to suppress this basic human right. So my first thought when “Check”-fil-A came to me was, ‘F**k no!’,” she wrote. “But then I decided, ‘F**k yes.'”

Why? She decided to use the restaurant chain’s money for good instead of evil.

“I am donating every dime that I make from that ad to Lambda Legal, the largest national legal organization working to advance the civil rights of LGBTQ people, and everyone living with HIV,” Slick wrote. “Instead of them replacing my song with someone else’s and losing this opportunity to strike back at anti-LGBTQ forces, I decided to spend the cash in direct opposition to “Check”-fil-A’s causes – and to make a public example of them, too. We’re going to take some of their money, and pay it back.

“You might think I’m writing this just to cover my ass for allowing a company whose practices many find morally objectionable to use Starship’s music… From the moment I agreed to license the song, I knew I wanted to set an example for other artists. I wanted to tell them, ‘Your art will survive and thrive. Do not let it be used by companies who support intolerance. Don’t be afraid to take a stand. You’re an artist; that’s what we do.’

“I hope more musicians will think about the companies that they let use their songs; we can use our gifts to help stop the forces of bigotry. Nothing’s gonna stop us now.”

5 perfect foods to prepare for the ultimate healthy workout

Rally last night at the Stonewall Inn for transgender youth