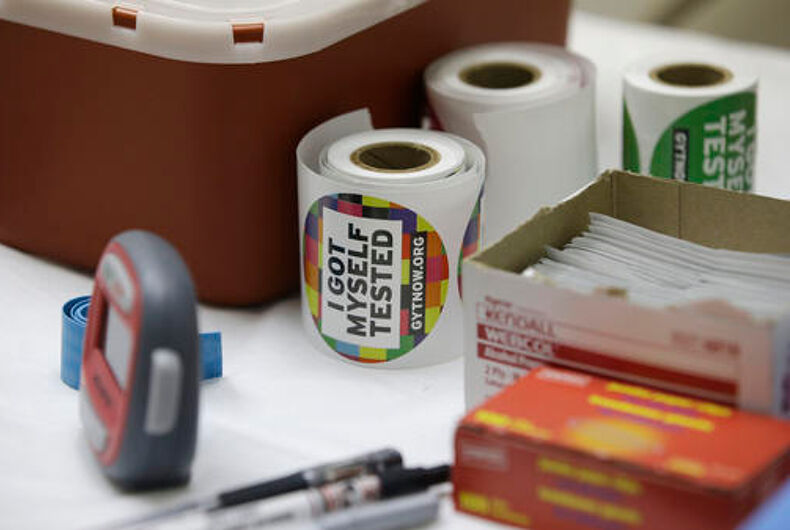 FILE - This Tuesday, April 21, 2015 file photo shows stickers given to clients after they get tested for HIV at the Austin Community Outreach Center in Austin, Ind. The nation is seeing a steady and substantial decline in the number of new HIV infections occurring each year, according to new federal estimates released on Tuesday, Feb. 14, 2017. Photo: (AP Photo/Darron Cummings)

The number of new cases has been falling for years. But health officials wanted a clearer picture of how the epidemic was behaving. They count people when they were diagnosed with the AIDS virus — not when they actually contracted it, which can be months or years earlier.

Counting infections instead of diagnoses is a more ideal gauge — a kind of speedometer that tells how fast the epidemic is actually moving, said David Holtgrave, an HIV researcher at Johns Hopkins University.

The Centers for Disease Control and Prevention used blood test results to help date the infections. Their calculations showed new infections dropped by nearly 18 percent over six years, the CDC reported Tuesday. Though health experts expected a decline, they welcomed the confirmation.

“It’s very exciting to see this kind of drop,” said Ron Brookmeyer, a statistician at the University of California, Los Angeles.

It suggests that stepped-up efforts to diagnose and treat infections are paying off, he added.

Two-thirds of the people who are diagnosed with HIV each year are gay and bisexual men. The CDC saw substantial declines in new infections in very young and in middle-aged men in that group. But there was a 35 percent increase in men ages 25 to 34, offsetting the other decreases.