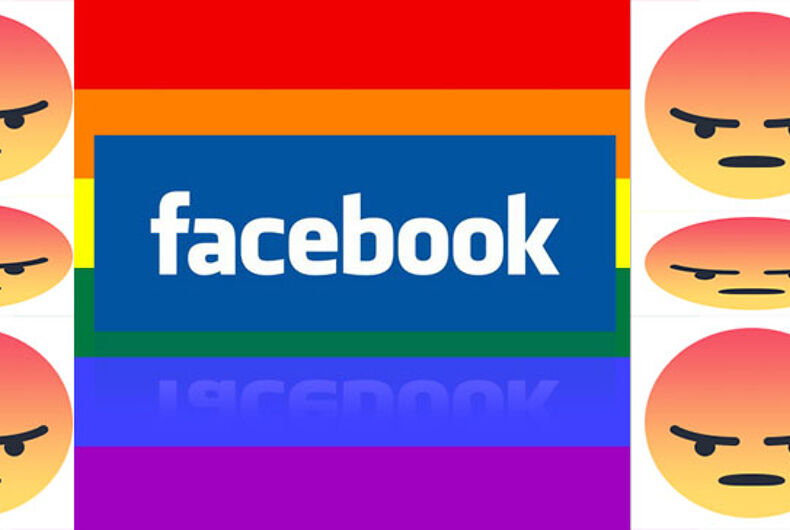 Sponsored ads on Facebook are downright creepy, with the advertisers who buy them seeming to know just who we are and what we might be interested in.

An ad for a Christian religious group known as Anchored North is worse than your average offender. The ad is popping up on unsuspecting queer Facebook users and features a video of a man who claims to have given up being gay since embracing his Christian faith.

In the video, which you can watch below, the unidentified man says he grew up knowing he was gay, enjoyed the pleasures of men at Hollywood parties, and yet was depressed. So, as Unicorn Booty reported, he turned to Christianity, and in time came to believe that homosexuality was sinful and wrong.

And miracle of miracles, he also came to believe he wasn’t really gay. This, even though he had felt an attraction to men since middle school and had a long history of dating them.

“Homosexuality was not who I was,” he says in the video.

“Homosexuality is the deal-breaker for the LGBT community when it comes to Christianity,” he claims, painting us as intolerant of an ideology that so often condemns us as being perverts, freaks and heathens.

“It’s unloving to let people spend eternity apart from God,” he says. That word, “let,” suggests the proper response is conversion therapy, also known as “ex-gay” or “reparative” therapy, which is outlawed in several states and contends one can “pray away the gay,” and become heterosexual.

The ad concludes, “Even if you have found your identity in worthless things, Jesus died, and resurrected for you.” Worthless, like your authentic self or sexual orientation.

Here are some of the comments Unicorn Booty culled from the many angry responses:

The sponsor of the ad, Anchored North, is a religious group, which describes itself on its website as “next generation evangelists, using media and evangelism to reach the lost with the gospel in a way that has never been done before.” And as Unicorn Booty pointed out,  Anchored North also targets women with a video called “I Forgave My Rapist.”

Trans woman’s legal battle in limbo after changes in Washington