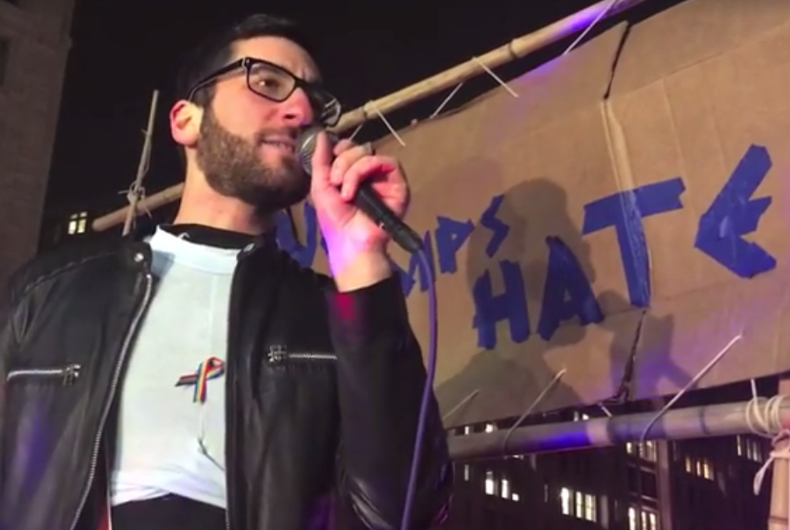 Firas Nasr said, "An attack on any one of our communities is an attack on all of us."Photo: Screenshot/Facebook/Washington Blade

A dance protest party was held in Washington, D.C., that started at the Trump International Hotel and went to the White House. The group followed a truck that was blasting dance music and leading chants.

The dance – held at freezing temperatures – was organized by WERK for Peace. Lead organizer Firas Nasr told the Washington Blade, “We are here to send a clear, clear message to Donald Trump and his administration that we will not tolerate discrimination, hate, or bigotry in our country.”

The group did not apply in advance for a permit, but D.C. police quickly closed roads to make way for the demonstration.

The dance party stopped a short distance from the White House as a fence around the area set up for Donald Trump to watch the Inaugural Parade blocked passage. “Yes, we were stopped by a fence but that doesn’t stop us from loving one another,” Nasr said.

Jessica Raven, an activist who works to end harassment of LGBTQ people and women, led the group in a solidarity chant, where demonstrators said “We’ve got your back” when various identities were called out.

The party showed solidarity in the face of Donald Trump’s executive order barring citizens from seven mostly-Muslim countries from entering the US. Music from the targeted countries were featured on the playlist.

WERK for Peace held a dance party outside Mike Pence’s D.C. home two weeks prior to this demonstration.

Thousands rallied against Donald Trump at the Stonewall Inn