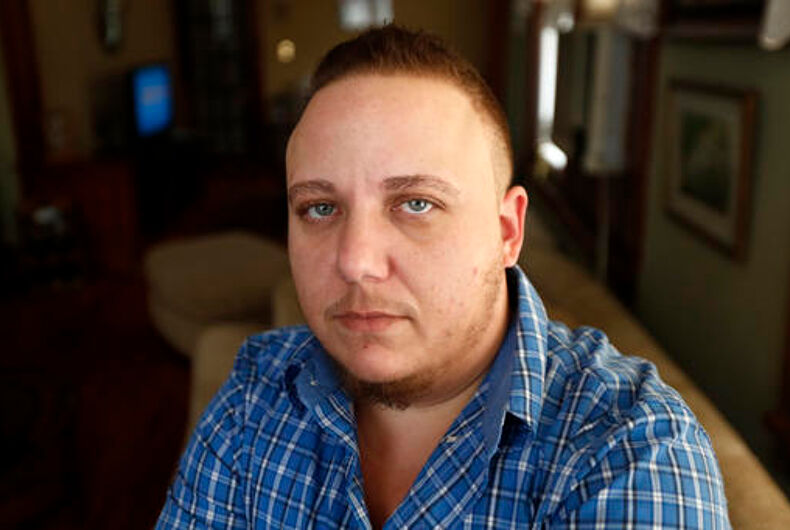 FILE – In this Jan. 5, 2017, file photo, Jionni Conforti, a transgender man who filed a federal lawsuit after uterus removal surgery as part of his sex transition was canceled by St. Joseph's Regional Medical Center in Paterson, N.J., poses for a portrait by The Associated Press in his home in Totowa, N.J. Saint Joseph's Healthcare System denies unfairly discriminating against Conforti, arguing in the Catholic hospital's Friday, Feb. 10, 2017, response to the lawsuit that a court ruling in the transgender man's favor would violate freedom of religion. Photo: (AP Photo/Julio Cortez, File)

TRENTON, N.J. (AP) — A Catholic hospital denies that it unfairly discriminated against a transgender man who sued after the hospital refused to allow a surgeon to remove the man’s uterus as part of his sex transition.

Saint Joseph’s Healthcare System said that a court ruling in Jionni Conforti’s favor would violate its constitutional right to freedom of religion. The hospital filed its response to the lawsuit Friday in federal court.

The 33-year-old Totowa man had scheduled the hysterectomy at St. Joseph’s Regional Medical Center in Paterson in 2015. His lawsuit alleges a hospital administrator told him the hospital couldn’t perform the procedure to remove his uterus because it is a Catholic hospital.

He later had the surgery performed at another hospital, but Conforti is seeking a court order requiring the hospital to perform any needed medical care for transgender patients. He is also seeking monetary damages.

“The damages caused by the delay, as well as the humiliation and the stress caused by being discriminated against, is something that cannot be excused and are contrary to the law,” said Conforti’s attorney, Omar Gonzalez-Pagan, of Lambda Legal. “St. Joseph’s purportedly prides itself on having a patient-first approach. When you discriminate against a patient because of who it is that really is not putting the patient first.”

The hospital said in its response that Conforti’s claims are barred by the First Amendment and that the court system shouldn’t be able to interpret ethical and religious directives from the U.S. Conference of Catholic Bishops followed by the hospital. The directives say procedures judged “morally wrong” by the church don’t have to be performed.

It also cites state law that says no hospital can be required to provide sterilization services or procedures.

Conforti said a nurse in charge of surgery confirmed the procedure could be scheduled but his doctor was told later it wouldn’t be allowed because it was for gender reassignment.