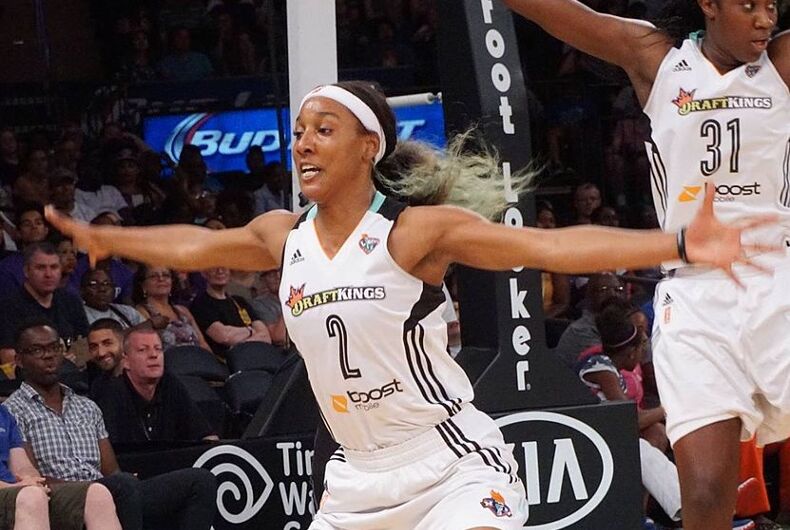 Retired WNBA point guard Candice Wiggins claims that gay women constitute an oppressive majority in the league and that her eight year-career was filled with anti-heterosexual harassment.

In a recent interview with the San Diego Union Tribune, Wiggins said that she was deliberately mistreated for being straight and feminine in a culture that celebrated queerness and masculinity.

“Me being heterosexual and straight, and being vocal in my identity as a straight woman was huge,” Wiggins said. “I would say 98 percent of the women in the WNBA are gay women. It was a conformist type of place. There was a whole different set of rules they [the other players] could apply.”

There is no data on the percentage of WNBA players who are lesbian or bisexual, but the Union Tribune notes that 12 of the leagues’ roughly 120 players have come out publicly — about 10 percent.

“It was my way to illustrate the isolation that I felt personally,” Wiggins said. “I felt like the 2 percent versus the 98 percent. It felt that way to me. And it’s not just the players. It was the coaches. It was the leaders.”

Because the women’s league receives so little attention compared to the men’s, Wiggins said that it was rife with jealousy and competition. Being different, she argued, made her that much for of a target for the league’s “toxic” culture.

“The way I looked, the way I played – those things contributed to the tension,” she explained. “People were deliberately trying to hurt me all of the time. I had never been called the B-word so many times in my life than I was in my rookie season. I’d never been thrown to the ground so much. The message was: ‘We want you to know we don’t like you.’ “

Wiggins, who was inducted into the Breitbard Hall of Fame at the San Diego Hall of Champions Tuesday, said that one of the reasons other players didn’t like her is because the league’s culture values masculinity over femininity.

“It comes to a point where you get compared so much to the men, you come to mirror the men,’ she said. “So many people think you have to look like a man, play like a man to get respect. I was the opposite. I was proud to a be a woman, and it didn’t fit well in that culture.”

But other players are questioning Wiggins characterization of the league, while being clear that bullying is not acceptable.

“You chose to typecast an entire league instead of speaking your peace, telling your truth. You chose to put all of us down, fans included,” Boyette wrote, expressing disappointment at the actions of a player she had looked up to. “I have never experienced the bullying you spoke about, and I hope no one else ever does.”

San Antonio forward Monique Currie also denied witnessing or experiencing the kind of bullying Wiggins described, but said there could be a element of truth in her comments.

“Although this interview caused quite a stir, maybe, just maybe, these experiences were real,” Currie wrote. “It’s fair to say that during a span of eight years in the WNBA there were possibly more gay players than non-gay players. Does this matter in the grand scheme of things? No. But it does matter to someone who’s not in the majority. Perception is real.”

But even if Wiggins was in the minority during her time in the WNBA, Currie said placing blame on the entire league isn’t fair.

“Wiggins needs to check her privilege at the door, and not group her very unfortunate personal experiences on an entire group of women,” she said.w

Government money used to pay for gay clubs with backrooms