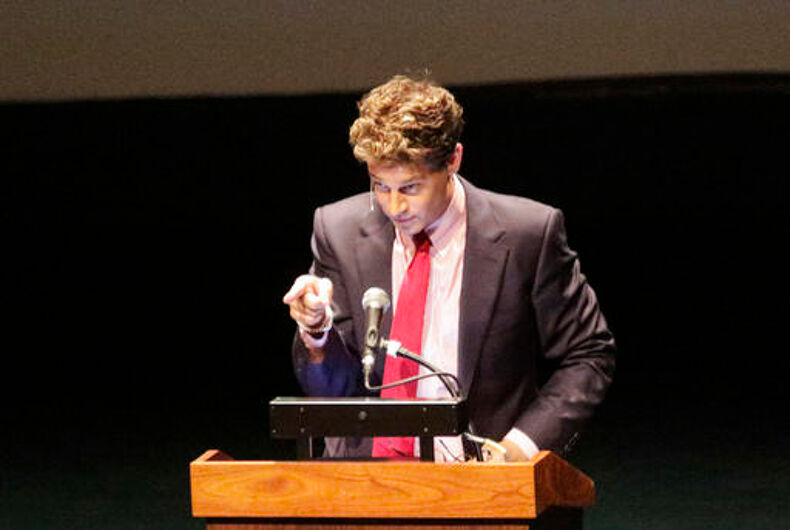 BERKELEY, Calif. (AP) — Fans and foes agree that Milo Yiannopoulos specializes in controversy. The polarizing editor from Breitbart News is a self-proclaimed internet troll who has been criticized as racist, misogynist and white supremacist.

His scheduled visit Wednesday to the University of California at Berkeley has raised an issue facing campuses across America at the dawn of the Trump presidency: What is the line between free speech and hate speech?

The visit is sponsored by the campus Republican club. The university has stressed it did not invite Yiannopoulos, a right-wing provocateur who is gay and calls his event “The Dangerous Faggot Tour.”

The potential for physical danger in reaction to Yiannopoulos came into the spotlight this month after a man was shot and wounded at a protest outside his Jan. 21 University of Washington talk.

On Tuesday night at California Polytechnic State University in San Luis Obispo, his speech was met with dozens of angry protesters outside a campus theater, but they were outnumbered by police who kept them far from the nearly 500 attendees and the event went on as planned.

His last stop was supposed to be UCLA on Feb. 2, but that invitation was rescinded, making Berkeley the grand finale of his cross-country campus tour.

Professors have joined hundreds of students calling for the event’s cancellation. But university officials say it will be allowed in the name of free speech — as will protests that Berkeley Chancellor Nicholas Dirks expects could be “substantial” amid tight security.

“In our view, Mr. Yiannopoulos is a troll and provocateur who uses odious behavior in part to ‘entertain,’ but also to deflect any serious engagement with ideas,” Dirks wrote last week to Berkeley’s staff and 37,500 students. “He has been widely and rightly condemned for engaging in hate speech.”

But as a public university, Berkeley’s administrators are legally bound by the First Amendment to protect free speech, meaning even offensive and hate speech cannot be banned or censored, Dirks said.

“We are defending the right to free expression at an historic moment for our nation, when this right is once again of paramount importance,” Dirks said.

His letter did not name President Donald Trump, whom Yiannopoulos supports, but highlighted concerns at Berkeley and elsewhere since his election.

The Berkeley Republican Club says it has no plans to cancel the event because that would send a message that intimidation and violence can win.

“We don’t support everything he’s said or done,” said Pieter Sittler, 19, a sophomore who is the club’s vice president. “But we think it’s important to have a complete political discourse. Not just stay in an echo chamber and silence what you disagree with.”

The event’s 500 seats sold out about 48 hours after the event was announced last fall, Sittler said.

Yiannopoulos “gives a voice to repressed conservative thought on American college campuses,” Sittler said, adding that he uses “levity and humor” that should not be taken literally.

Administrators say the demands to stifle Yiannopoulos show that modern sensitivities are changing the debate about free speech on campus. What used to be a campaign to allow all voices risks becoming more restrictive.

The number of attempts to keep speakers off college campuses because of their politics doubled last year, according to a report issued late last year by the Foundation for Individual Rights in Education. It logged a record 42 incidents of “disinvitations,” with 25 percent aimed at Yiannopoulos.

“The increasing unwillingness to allow anyone on campus to hear ideas with which one disagrees poses a grave risk to students’ intellectual development,” Ari Cohn, director of the foundation’s Individual Rights Defense Program, said in a statement.

Administrators have received hundreds of letters and emails calling for the event’s cancellation.

There’s a “No Milo” at Berkeley Facebook page with more than 3,500 people signed on, calling for a “mass counter protest” to shut down the event.

Nearly 100 professors signed a letter to the chancellor urging him to cancel the event. It cited some of Yiannopoulos’ earlier comments.

At the University of Delaware, Yiannopoulos referred to transgender people as “mentally ill” and encouraged his audience to mock them.

He has called Black Lives Matter a form of “black supremacism.” Twitter banned him in July, as it cracked down on racist abuse targeting “Ghostbusters” actress Leslie Jones.

“The university should not provide a platform for such harassment,” the letter from professors said. “We support robust debate, but we cannot abide by harassment, slander, defamation and hate speech.”

Yiannopoulos rejects accusations he is racist or white supremacist, saying his boyfriend is black and his humor is taken too literally in today’s politically correct culture.

A group of veterans from Berkeley’s 1960s Free Speech Movement praised administrators for allowing the event.

“Even the worst kind of bigot, including Yiannopoulos, must be allowed to speak on campus,” they wrote in In an op-ed published by Berkeley’s The Daily Californian.