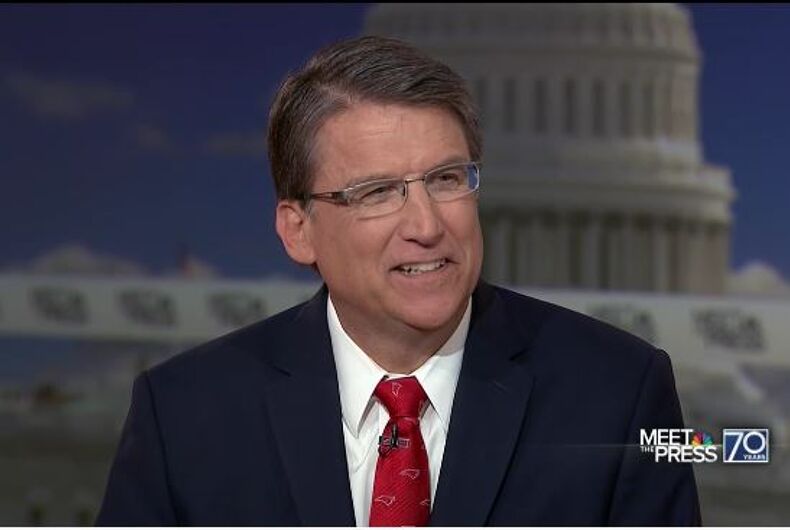 Pat McCrory made his first appearance on “Meet The Press” as a former politician on Sunday, but he is still playing fast and loose with the truth.

McCrory signed House Bill 2 (HB2) into law, which has cost the state millions of dollars and hundreds of jobs, and contributed to his ousting as the state’s governor in spite of it going for Trump, with whom he campaigned.

Texas has the “exact same law” as North Carolina

Texas is considering a “bathroom bill” that would require individuals to use the facilities matching the gender on their birth certificate. The legislation, Senate Bill 2, has yet to pass and the NFL is warning the state that if it is enacted they could miss out on future Super Bowl opportunities.

After saying he didn’t regret signing HB2 into law, despite it costing North Carolina the NBA All-Star Game, McCrory said he was “very concerned about this Orwellian purging of cities and states.”

You watch video of the segment at the bottom of this post.

McCrory claimed that the anti-Trump protesters, like the hundreds of thousands who attended the Women’s March on Washington rally, as well as the sisters marches around the globe, are paid.

He said to “follow the money” and that “money is going to the Bernie Sanders wing. Do you think all these protests are not being paid?”

President Trump himself has repeated the conspiracy theory that protesters are being paid to demonstrate against him, as has Press Secretary Sean Spicer.

Professional anarchists, thugs and paid protesters are proving the point of the millions of people who voted to MAKE AMERICA GREAT AGAIN!

A fake news story on a website that tries to appear to be ABC News has a Trump protester claiming to have been paid $3,500.

Trump threw out an African American supporter from one of his rallies during the campaign, mistaking him for a protester. He asked him if he was paid $1,500 to protest and called the man a “thug.”

Politifact rated a claim that Women’s March protesters were paid by George Soros “Pants on Fire.”

“It takes money to organize these protests,” McCrory said, which is a different claim from protesters themselves being paid, a fact he blows right past.

“No, it takes money,” McCrory doubled down, offering no evidence.

McCrory was recently targeted by protesters during Trump’s inauguration weekend in D.C. as well, getting chased down an alley, with his critics yelling, “Shame!”

McCrory claimed, yet again, that refugees are not being properly vetted. He made this same claim during a debate with current Gov. Roy Cooper during his reelection campaign.

He said the FBI doesn’t believe the vetting process is acceptable, “especially in countries like Syria that have a total breakdown of government.”

He also said the FBI doesn’t know where the refugees go after they enter the country.

Politifact rated his claims “mostly false,” noting that the U.S. has an embassy in Syria, that the initial vetting is almost always handled by United Nations workers, and that they then go on to the FBI and to other federal agents, who do background checks and interviews, medical screenings and cultural orientation.

Syrian refugees go through an added layer of security check after that, which can take two years or longer.

You can read the full transcript of McCrory’s appearance on “Meet The Press” here.