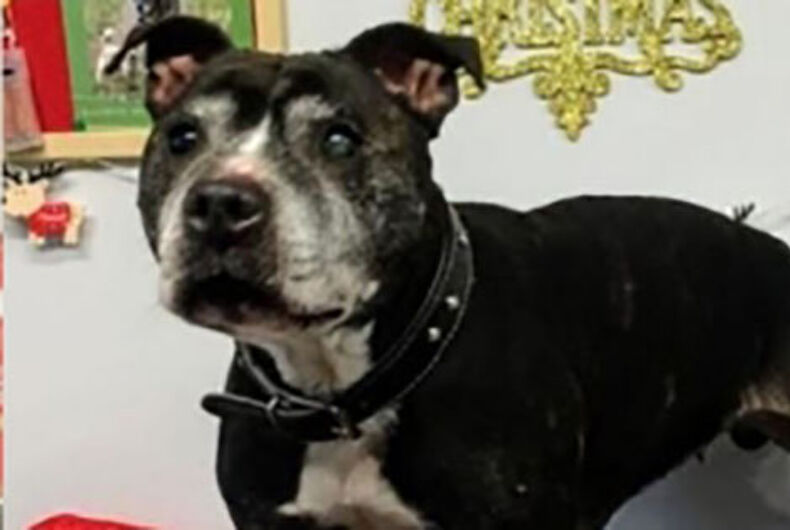 Jodie the intersex dog needs a home, and the British shelter where she’s been living is publicizing her sad story in hopes of finding her one.

The 12-year old Staffordshire bull terrier has been languishing in the Royal Society for the Prevention of Cruelty to Animals for months, ever since her owner abandoned her, according to the post by the shelter in Southend, Essex.

As PinkNews reported, Jodie has a mixture of male and female reproductive organs, and the shelter’s workers have opted to use female pronouns for her.

They say prospective families have been “put off” from adopting her once they learned of her indeterminate gender.

“While this doesn’t cause her any issues or difficulties,” said the RSPCA’s Kathy Butler, “I think this is putting off potential adopters.”

“As an older Staffie with an unusual physicality, we think Jodie is being unfairly overlooked as we haven’t had any interest in rehoming her.

“She is such a wonderful dog that she really does deserve a happy, loving retirement home where she can live out her final years in comfort.”

The RSPCA issued a “special appeal” on its website, in hopes Jodie might find a real home.

“Jodie is a senior Staffy, around 12 years old. Who can resist a lovely grey muzzle like this?!

“She loves people and still enjoys her walks. Jodie has not been comfortable around some large dogs, but we have begun introducing her to smaller younger dogs and she has been polite and happier with them.

“We feel a home where she is the only dog would suit her best though. She cannot live with cats.

“Jodie is extra special because she is a hemaphrodite. So she has female and some male organs too. This may be off putting to many, but to her it is not an issue and causes no difficulties.

“She’s been with us some time, without a single enquiry. As a senior Staffy with an unusual physicality we feel she is being overlooked constantly. So we’re putting her as our Special Appeal in the hopes of finding an adopter.”