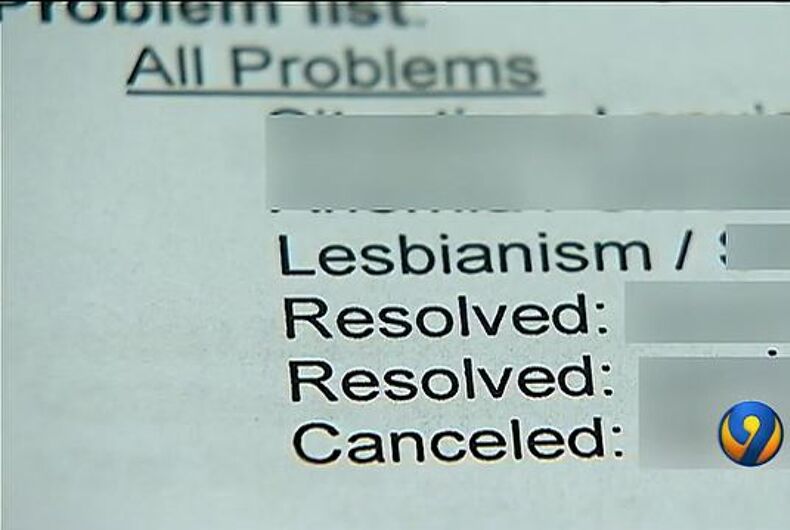 A North Carolina woman was shocked to find “lesbianism” listed as a diagnosis on her medical history chart.

Kristina Rodriguez saw the note on her medical record after getting blood work done at Lake Park Family Practice of Carolinas Healthcare System, in Indian Trail.

“This listed as a medical problem could really set someone back, could mess with their self-esteem and could make them think something is wrong with them,” Rodriguez told WSOC-TV. “I hope to bring change to where stuff like that is not disclosed on your medical record, because that’s personal information.”

She said she has been seeing the medical provider since she was ten years old.

“They’re my doctor, they’ve always been someone I trust, and someone that I like. And it’s always been a positive experience,” she said. “I don’t think he had any ill-intent with putting it on there, but I truly don’t know.”

“This is not an appropriate clinical diagnosis, and we are actively investigating how this information was included,” Carolinas Healthcare System said in a statement on Tuesday night.

It continued by saying the system “strongly supports diversity and inclusion.”

While Rodriguez was happy with the statement, there are reasons to question the claim.

Carolinas Healthcare System does not have a non-discrimination policy protecting LGBTQ individuals, as noted by the Human Rights Campaign’s 2016 Healthcare Equality Index.

Their discrimination policy, which can be found online, does not include protections against discrimination on the basis of sexual orientation or gender identity. There is also no federal law and no North Carolina state law protecting against such discrimination.

Rodriguez also said a spokesperson for the hospital said they put “lesbianism” on her record to keep staff from referring to her partner as “husband.”

Another statement from the healthcare provider said, in part, that they had work underway to improve the way in which they collect patient information:

Carolinas HealthCare System recognizes optimum care depends on strong relationships between doctors, care teams and patients. To that end, our physicians and care teams seek information to help them understand as much as possible about patients, their families, and their lives to treat them holistically. Health care providers everywhere are working to better understand the best way to include information in the most sensitive and respectful way to each patient. Like other providers, we are continuously working to improve our process and have work underway to enhance our efforts to appropriately collect patient information in accordance with  industry best practices guided by the Human Rights Campaign.

Sexual orientation is not a clinical diagnosis and we will be working closely with our physicians and providers to ensure that information included in medical records is appropriate, respectful and consistent with our belief in the importance of diversity. We strongly support diversity and inclusion in all our interactions with patients, the public and our teammates, including creating an affirming environment for LGBT patients and their families.

Watch Rodriguez talk about the experience in the video below.