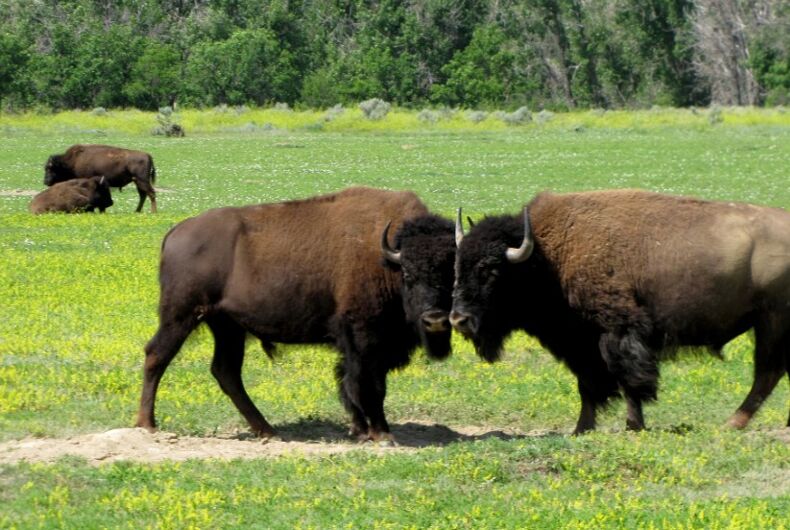 BISMARCK, N.D. (AP) — The North Dakota Legislature is deciding whether to update state law to reflect the U.S. Supreme Court’s 2015 decision that declared same-sex couples have the right to marry, or to do nothing as a sign of protest.

The measure, which got its first hearing Wednesday in the Senate Judiciary Committee, would update dozens of references such as “husband and wife” to gender-neutral terms. North Dakota’s volumes of state laws, which are called the Century Code, list “one man, one woman” or “husband and wife” for everything from marriages and divorces to fishing licenses.

The Senate Judiciary Committee will decide later whether to endorse the proposal. Its recommendation will be followed by a Senate vote.

The committee’s chairman, Sen. Kelly Armstrong, said he’s received more than 300 emails from both supporters and opponents of the measure. Armstrong said some want to keep references of husband and wife on the books as a protest to the high court ruling.

Armstrong said adopting the measure, or turning it down, would be nothing more than a symbolic move by the Republican-led Legislature.

“The definitions mean very different things to different groups of people but the practical effect is nothing,” he said.

North Dakota has now-moot state laws defining marriage as between a man and a woman, and 73 percent of North Dakota voters approved a state constitutional amendment in 2004 limiting marriage rights to man-woman couples.

Jen Dunn of Bismarck told lawmakers that approving the measure will make state law consistent with the Supreme Court ruling.

“There is no husband in my marriage,” she said. “To deny same-sex couples inclusive language is to deny equal value to their union.

About 85 same-sex couples were legally married in North Dakota through November 2016, said Donnell Preskey Hushka, a spokeswoman for the North Dakota Association of Counties.

The new Carrie Fisher and Debbie Reynolds documentary will gut you

Will Obama’s greatest accomplishment be his record on LGBT rights?