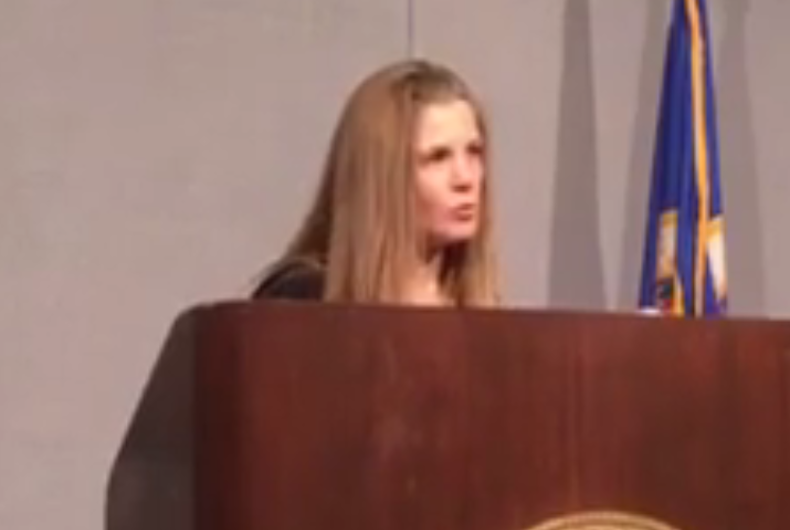 Anmarie Calgaro, who insists that the suit is not anti-trans, argued that hormone replacement therapy is dangerous at a press conference.Photo: Facebook

A Minnesota mother sued her own daughter to prevent her from transitioning, and the daughter’s story has been revealed in court documents.

Anmarie Calgaro filed suit last November against her 17-year-old emancipated daughter identified in court documents as “E.J.K.” when Calgaro found out that her daughter was receiving hormone replacement treatments. Calgaro is being represented by an anti-transgender advocacy group, the Minnesota Child Protection League, and an anti-abortion advocacy group, the Thomas More Society.

“The news that county agencies and health service providers, the school and other county and state offices were completely bypassing me came as a total shock,” said Calgaro in a press conference in November. “Why wasn’t I even notified?”

A brief filed by E.J.K.’s attorney says the teen grew up in a home that was unstable because of her parents’ substance abuse. She says she cooked and dressed herself from a young age and sought help from other adults, including her grandmother.

E.J.K. says she knew she was a girl ever since she was a young child. At age 13, her parents became physically abusive when E.J.K. came out as gay. She moved in with her father two years later, who was then incarcerated.

She sought emancipation and has been living on her own and working a full-time job. She has already been admitted to college programs for nursing next year.

Her attorney says that E.J.K. fits the definition of an emancipated teen. E.J.K. will be turning 18 this summer, and then it will be impossible for Calgaro to regain parental rights. This is why attorneys for Calgaro are seeking a summary judgment instead of a jury trial: the court process has to move quickly for Calgaro to have any chance at winning.

Calgaro seeks to regain parental control over her daughter, who she continues to mis-gender. She is also suing for damages from the county, the school board, the director of the county’s Health and Human Services agency, two clinics, and E.J.K.’s high school principal.