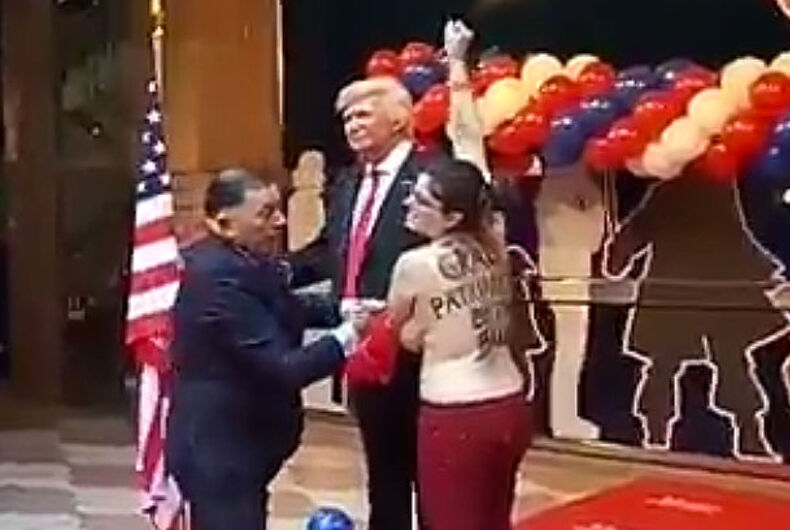 If a picture is worth a thousand words, then a pair of bare breasts in a viral anti-Trump tweet must be worth at least two-thousand. The proof is in the video, shared by a Spanish language news service, and retweeted more than 2,000 times.

It shows a woman yelling while standing outside the waxwork museum in Madrid, Spain, at Tuesday morning’s chilly public debut of its newest attraction: a wax figure of President-elect Donald Trump.

On her bare breasts, the words “GRAB BACK” are scrawled — in reference to Trump’s 2005 hot mic episode with an entertainment reporter, in which he bragged that when it came to beautiful women, he liked to “grab ’em by the pussy.”

The woman in this protest was identified by JoeMyGod as a member of Femen Spain, a group of feminist activists responsible for a number of similar demonstrations for a variety of causes, including LGBT rights. Their trademark is to protest topless.

In the video recorded by Femen Spain, this protester yelled to reporters and photographers, “Grab patriarchy by the balls!” as museum officials attempted to cover her with a coat, then red, white and blue balloons. The video goes on at least 45 seconds without any of the men trying to impede her demonstration having any success in either shielding her or silencing her.

Watch the video below, but first: if you’re at work, be warned that your boss or coworkers might find it inappropriate.