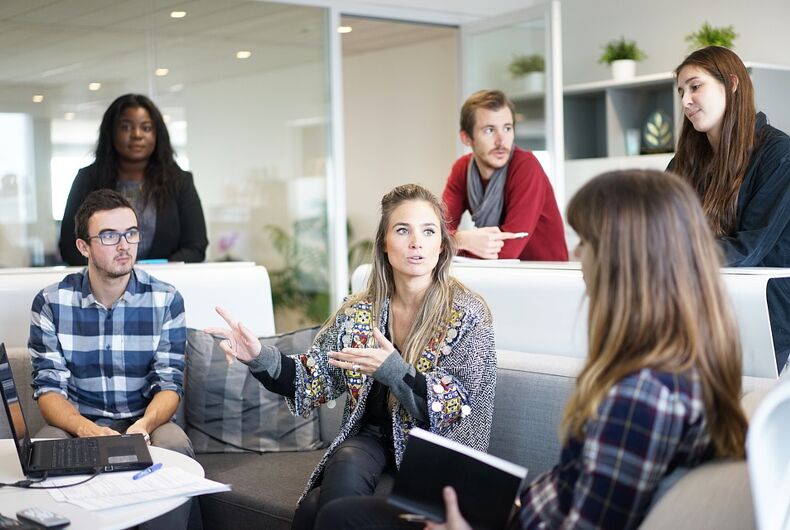 Determining whether or not you come out in the workplace can be a difficult decision, but in many cases the choice is made for you.

A recent study suggests that the assumptions made, as well as the questions posed by, colleagues (even the well-meaning ones) can make life more stressful and the work environment harder to navigate for gay, lesbian and bisexual individuals.

Einarsdóttir explains in a recent article about her study, written for the LSE Business Review, that the concept that it is up to an employee when they come out to their coworkers is a flawed one.

“The study not only shows that colleagues play a significant part in the coming out process, but they are also likely to reach their own conclusions about sexual identities,” she writes.

She goes on to say that while there isn’t anything wrong with “having the ability to read someone’s sexuality” (aka “gaydar”) per se, “problems can arise when identities and stereotypes are either matched or mismatched.”

“Questions about partners can provoke disclosure of sexual identity, so can unwanted sexual attention, exposure to homophobic remarks and personal crisis affecting work performances,” she says. “In these situations, colleagues not only aid disclosure (e.g. with questions or remarks), they can also inflict disclosure as lesbians and gay men try to fend off assumptions about heterosexuality.”

“That said, some behaviours and personal circumstances seem to trigger suspicions about non-heterosexual identity amongst colleagues, such as being 40+ and still unmarried, failing to talk about boyfriends or girlfriends, being too ‘private’ or simply being associated with other lesbians, gay men or bisexuals at work,” she adds.

However some non-heterosexual people “believe their sexuality is unmistakable,” due to the way they present themselves.

“They also accept that these ideas are based on stereotypes of lesbians and gay men, ideas which were shared by most of my interviewees, generally portraying lesbians as ‘not feminine’, ‘quite plain’ and ‘not beautiful’ and gay men as ‘loud’, ‘effeminate’ and ‘flamboyant’. Colleagues seemed equally attuned to these stereotypes, creating different problems for lesbians and gay men,” Einarsdóttir notes.

She also states that being seen as “too gay” or “failing to be ‘real lesbians'” could also cause problems and “could limit their choices at work and shape interactions with colleagues.”

It is likely for these reasons that another recent study found gay men alter their body language in the workplace to appear more “masculine.”

Einarsdóttir  writes that “it is easy to understand why academics have been unwilling to draw attention to stereotypes, as it may run the risk of reinforcing them.” But she adds that she takes “a different view and argue that without engaging with stereotypes it is impossible to challenge the prejudice they are effectively based on.”

She concludes by saying that the situation is particularly tricky for bisexuals.

“As for bisexuals, their challenges seem more far-reaching. In truth, lesbians and gay men rarely discussed bisexual identities (unless they were a part of the sequence lesbian, gay and bisexual), further cementing their invisibility and the marginal status of bisexuality within and outside of the non-heterosexual community.”

The greatest queer icons still with us in 2017