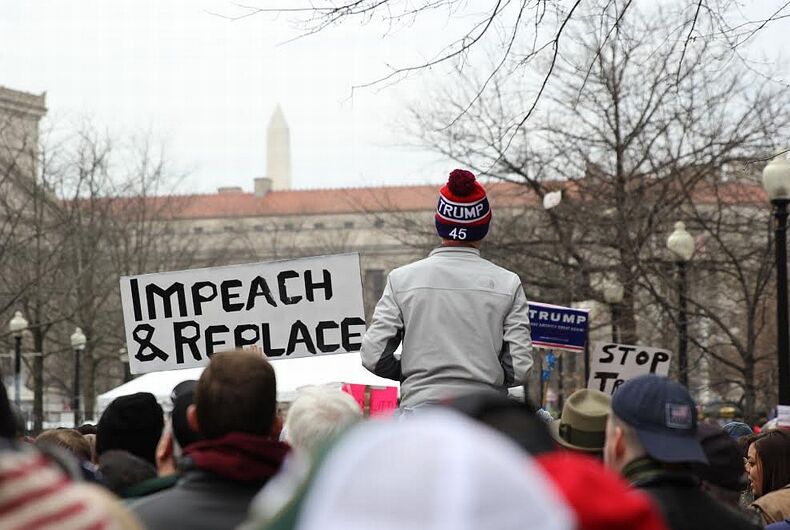 Trump supporters and protesters waited hours to get past security checkpoints for the inauguration parade.Photo: Taylor Goebels, MNS

As the nation witnessed the inauguration of Donald Trump as the 45th president of the United States, thousands of protesters and supporters alike flocked to Washington, D.C. to take part in the historic event.

LGBTQ Nation was there to document, speaking with those in favor and opposed to the incoming administration. Here is some of what we saw on this Inauguration Day, Jan. 20.

Those who stood came to stand against President Trump

Anti-Trump demonstrator Alex Salm explains why he wanted to attend the inauguration and make his voice heard.

They thought they would see Hillary Clinton sworn-in when they bought their tickets, but decided to attend to make their feelings of concern about a Trump presidency known.

Protesters at the site to line up and watch the inauguration, with Trump supporters walking by and sometimes yelling back.

Those who came to support President Trump

The party’s over, we’re back,” said Al Baldasaro, a Republican member of the New Hampshire House of Representatives, and known for his controversial call to execute Hillary Clinton in August of 2016.

Bikers sang the Star Spangled Banner in John Marshall Park to commemorate the swearing-in of Donald Trump as 45th president of the United States.

Trump supporters talk about what they hope to see done under his administration. One claims a connection between Hillary Clinton and the KKK, asking why it was ignored during the campaign.

She is most likely referring to Clinton’s connection to Sen. Robert Byrd, who was once a member of the KKK, later distancing himself from the group. When he died, the NAACP put out a statement praising him for how far he had come, becoming a supporter of civil rights in his later years.

He has been living in the United States for a month and says what he is seeing is the embodiment of the American spirit.

Other scenes from Inauguration Day

Muslims wishing to dispel negative stereotypes were at the inauguration, and at one point drew the attention of a Christian street preacher.

We arrived upon this arrest in progress by police at the inauguration. We do not have any additional information regarding this arrest at this time, and will update if that information becomes available.