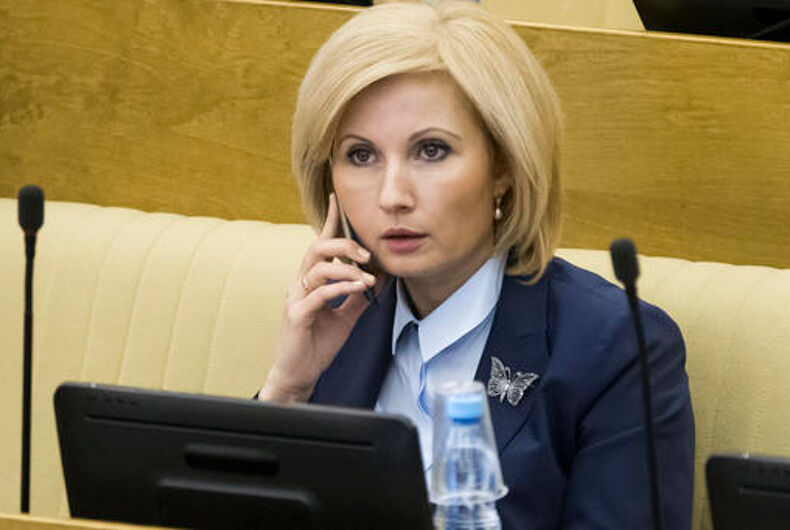 Russian lawmaker Olga Batalina, one of the bill's co-authors rejected suggestions that the bill would sow impunity for those who beat up their families, speaks on a phone at the State Duma (lower parliament house) in Moscow, Russia, Friday, Jan. 27, 2017. The State Duma voted 380-3 Friday to eliminate criminal liability for battery on family members that doesn't cause bodily harm, making it punishable by a fine or a 15-day day arrest. Photo: (AP Photo/Alexander Zemlianichenko)

MOSCOW (AP) — Soon it will no longer be a crime in Russia to beat family members — as long as you don’t cause bodily harm.

The lower house of the Russian parliament on Friday gave final approval to a bill decriminalizing some forms of domestic violence — a move that has sparked intense public debate.

The State Duma voted 380-3 Friday to eliminate criminal liability for battery on family members that doesn’t cause bodily harm, making it punishable instead by a fine or a 15-day arrest. The law needs to be approved by the largely rubber-stamp upper chamber and signed by President Vladimir Putin, who has signaled his support.

The bill has raised fears that it could sow impunity for those who beat up their wives and children, but its supporters have argued that it retains criminal responsibility for repeat offenders.

The measure is a response to conservative criticism of the current law, seen by some as a threat to parents who might spank their children.

The bill stems from last year’s Supreme Court ruling to decriminalize battery that doesn’t inflict bodily harm, but to retain criminal charges for those accused of battery against family members. The Duma then approved the corresponding legislation only to change course now.

Andrei Isayev of the main Kremlin faction, the United Russia, said lawmakers are “heeding the public call” by correcting a mistake they made last year.

A survey this month by state-run pollster VTsIOM showed that 19 percent of Russians said “it can be acceptable” to hit one’s wife, husband or child “in certain circumstances.” The nationwide poll by phone of 1,800 people was held Jan. 13-15. The survey had a margin of error of 2.5 percentage points.

Critics of the measure have warned that it would encourage domestic violence and fuel crime.

“This bill would establish violence as a norm of conduct,” Communist lawmaker Yuri Sinelshchikov said during the debate.

Data on domestic violence in Russia is scarce, but Interior Ministry statistics show that 40 percent of all violent crimes in Russia are committed in family surroundings. In 2013, more than 9,000 women were reported to have been killed in domestic violence.

Russian police are often reluctant to react to domestic violence calls, which many regard as meddling in family affairs.

Prosecutors in November began investigating a police officer who took a call from a woman complaining about her boyfriend’s aggressive behavior. Instead of offering help, the officer reportedly told the woman that the police would only come if she got killed. Shortly afterward, the man beat the woman to death.