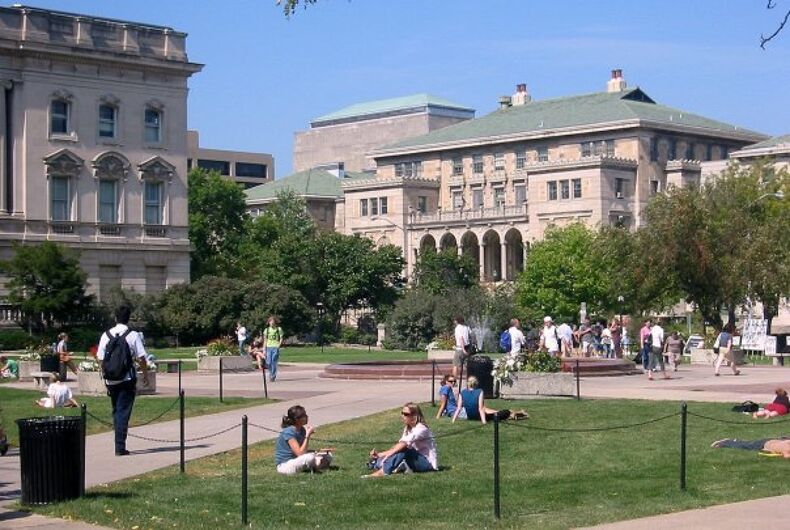 Memorial Union at the University of WisconsinPhoto: Wikipedia

The University of Wisconsin is offering a workshop for men, not for credit and totally voluntary, called “The Problem with Masculinity.” While Republicans disagree with the premise of the workshop, their diehard commitment to free speech means that they’re going to do everything in their power to ensure that it happens, unlike those hippies who have the audacity to refuse to review books by rightwing internet trolls.

“Our friends at UW-Madison, not happy enough with labeling ‘whiteness’ as a societal problem, now are attacking another social ill …, Men and their masculinity,” the email says.

“The supposedly underfunded and overworked administrators at our flagship campus have scrapped (sic) together enough dollars to offer a six-week program open only to ‘men-identified students,” the email goes on. “In short, the highly paid leaders at UW-Madison now believe that Wisconsin mothers and fathers have done a poor job of raising their boys by trying to instill in them the values and characteristics necessary in becoming a Man.”

The email concludes by encouraging legislators to reform the UW System in the next state budget.

From the description in the AP article, the workshop sounds like something where the content will largely be affected by the students attending. The only viewpoint it has seems to be that masculinity is a concept that men should engage critically. Just like workshops about “the problem with femininity” or “the problem with gay culture,” it’s not about denouncing what’s in the title but more about thinking about it and talking about it.

Of course, this is the entire problem for conservatives. Thinking about masculinity, whiteness, heterosexuality, cisgender status, or any other label on the privileged side of an axis of identity means that it’s going to lose some of its power. Part of masculinity’s power is that it’s not questioned, just followed. When people start to think about a power structure, they might make a decision on their own. For the authoritarian mind, this is unacceptable.

So there’s little wonder Nass cited parents in such a weird and awkward way in his statement. Men get their ideas of what masculinity is from a variety of sources, not just their parents, and the workshop is a criticism of what parents are teaching about masculinity just as much as a course on calculus is a criticism of parents for not teaching their kids enough calculus.

But it’s what Nass is thinking about since that’s what right-wingers always think about when they think about education: that it erodes the power of parents by presenting what might be an alternative viewpoint.