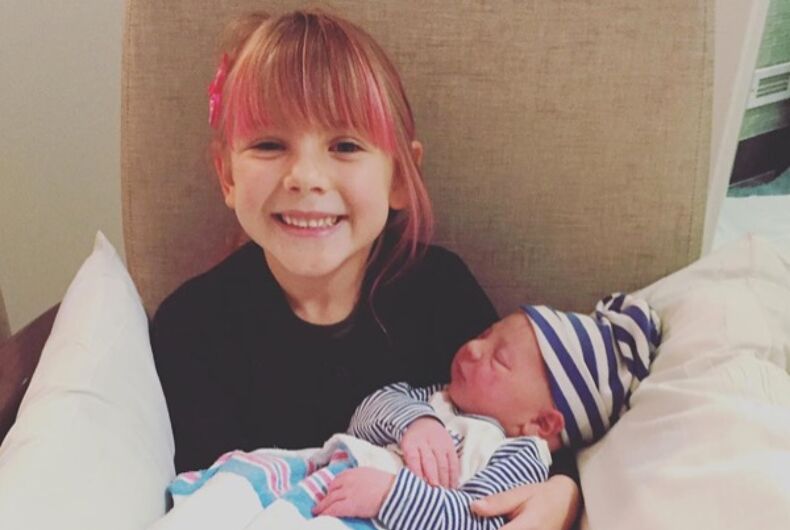 P!nk has kicked off the new year by sharing the first photo of her new baby with his big sister.

The 37-year-old singer, whose real name is Alecia Moore, posted a picture of her daughter Willow holding baby Jameson on Instagram Sunday. The 5-year-old looks thrilled and has a big smile on her face. She’s also showing off some pink highlights in her hair.

Moore wrote in the caption that she and husband Carey Hart “thank you for your love and we send it back to you in spades.”

P!nk was “outed” by a tabloid as bisexual, but the star later said that while she was an “honorary lesbian” when she lived in LA, the story wasn’t true.

“I loved my little girlfriends and we kissed and we had a great time and we held hands. When I first moved to Los Angeles, I was an honorary lesbian of Los Angeles. I wasn’t gay, but all my girlfriends were. So no, it wasn’t a big deal for me, but when [a tabloid] comes out and says, I just said I was bisexual, it’s like what? That wasn’t my truth, and I like truth. I like absolute truth,” she said in 2012.

P!nk was one of dozens of artists who participated in a charity single that raised money for the victims of the Pulse mass shooting last year.

Happy New Year 🎆 #newlove #newlife #newenergy #newhope #newday the harts thank you for your love ❤️ and we send it back to you in spades.

Simmer down: Milo Yiannopoulos won’t get a book review and that’s okay

Back to the future: Why is Donald Trump stuck in the 80’s?