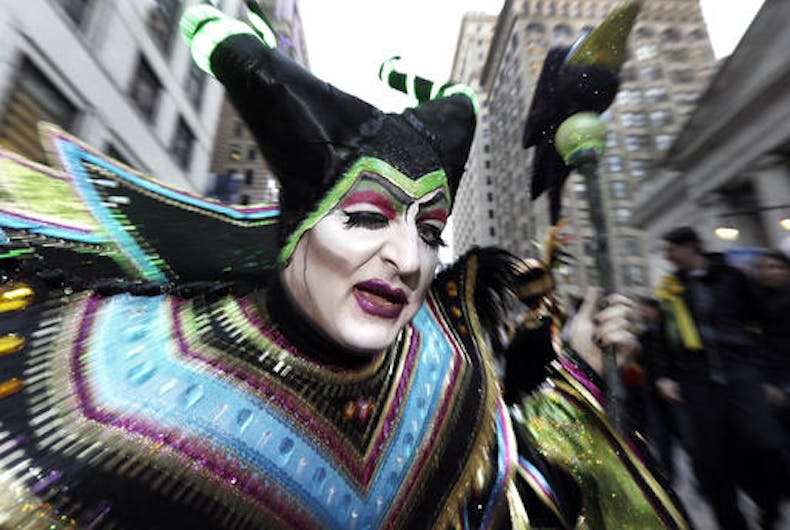 Nick Magenta, captain of the Polish American String Band, is the character Maleficent on Broad St. during the 2017 Mummers Parade in Philadelphia., on Sunday, Jan. 1, 2017. Photo: (Elizabeth Robertson/The Philadelphia Inquirer via AP)

Philadelphia has hosted the Mummers Parade since 1901, making it the oldest continuous folk parade in the country, with string bands, comic brigades, elaborate floats and plenty of feathers and sequins. More than 10,000 marchers — divided into more than 40 clubs — work year-round creating elaborate costumes and props and practicing skits and music.

But the festivities had been marred in recent years. Last year, one skit mocked transgender celebrity Caitlyn Jenner, another featured participants who painted their faces brown or dressed as tacos to portray Mexicans and a marcher was seen on video shouting expletives about gays.

In response, Philadelphia’s Commission on Human Relations coordinated a sensitivity training program — held in bars and community centers throughout the city — for Mummers that included talks about the differences between appropriate and offensive satire. Participation was voluntary.

The controversies had detracted from efforts to diversify. Two Latino groups, an African-American drill team and an LGBT drag-queen troupe were welcomed into the lineup in 2016 and walked again this year.

The 2017 parade seemed largely free of controversy. Although there were depictions of diverse groups — Native American tribes, Germans at Oktoberfest, Chinese celebrating the new year — the portrayals were not done in ways meant to harm or mock.

Republican President-elect Donald Trump was targeted by some. One member of a comic group wore a full-body suit Sunday that made it appear he was only clad in boxer shorts, which had “Trump” written on the back. He carried a sign that said “The Emperor’s New Clothes” on one side and “Flunked Sensitivity Training” on the other.

The Vaudevillains, another comic group, offered “Sanctuary City, Meow & Furever,” a reference to a feral cat colony cared for by neighborhood women, as well as a nod to the city’s policy that it is a “sanctuary city” that will try to protect residents from deportation. Brigade members pushed four large towers bearing the messages “Trump Homophobia,” ”Trump Racism,” ”Trump Xenophobia” and “Trump Misogyny.”

Dan Callahan of the Froggy Carr brigade sent a tweet Sunday morning saying police had threatened to arrest him if he did not get rid of the sign he was carrying because it was potentially offensive. It showed the crying face of Michael Jordan on Democrat Hillary Clinton’s shoulders, a popular 2016 meme.

In an interview later, Callahan clarified the tweet, saying parade organizers had given him that message while standing with police officers. He was unsure if he’d been asked to remove the sign because of the city’s strong Democratic roots or because organizers were unaware of the “crying Jordan” phenomena.

“I tried to explain it and said there was nothing racial about it … (but) all they saw was a black man’s face on a white woman who happened to be Hillary Clinton,” he said.