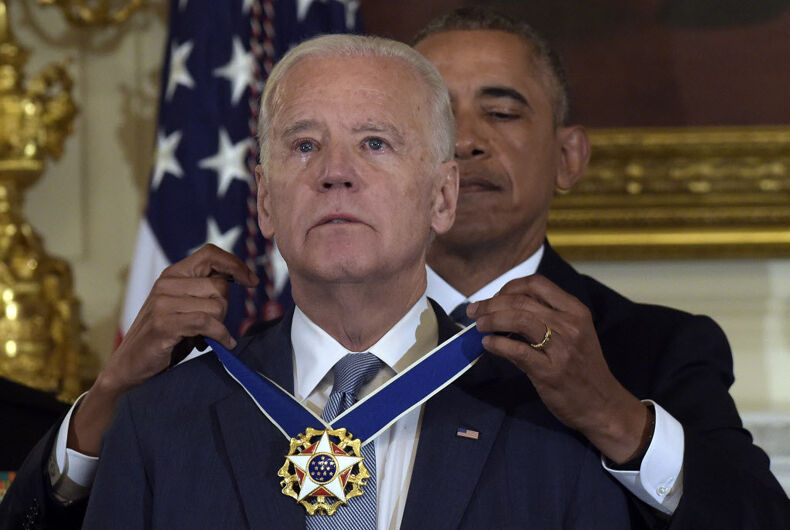 President Barack Obama bestowed the highest civilian honor on Vice President Joe Biden on Thursday, presenting him with the Presidential Medal of Honor.

“For your faith in your fellow Americans, for your love of country and for your lifetime of service that will endure through the generations…I am pleased to award our nation’s highest civilian honor: The Presidential Medal of Freedom,” Obama said.

Biden was not aware he would be receiving the honor, and became emotional upon the President’s announcement, turning away to wipe away tears.

"I am proud to award the Presidential Medal of Freedom with Distinction to my brother, Joseph Robinette Biden Jr." —@POTUS surprises @VP pic.twitter.com/Y8uB1W0fkG

“For the first and only time in my presidency, I will bestow this medal with an additional level of veneration, an honor my three most recent successors reserved for only three others: Pope John Paul II, President Ronald Reagan and General Colin Powell,” the President added.

Watch Obama present Biden with the honor in the videos below.

.@POTUS awards the Presidential Medal of Freedom with Distinction to @VP: https://t.co/XK7uEUOuhq

Watch Biden make his remarks in the video below.

"As long as there’s breath in me, I'll be there for you" —@VP to @POTUS after receiving the Medal of Freedom https://t.co/vdJdsmlToz

Ben Carson: No ‘extra rights’ for LGBT people if he becomes HUD Secretary