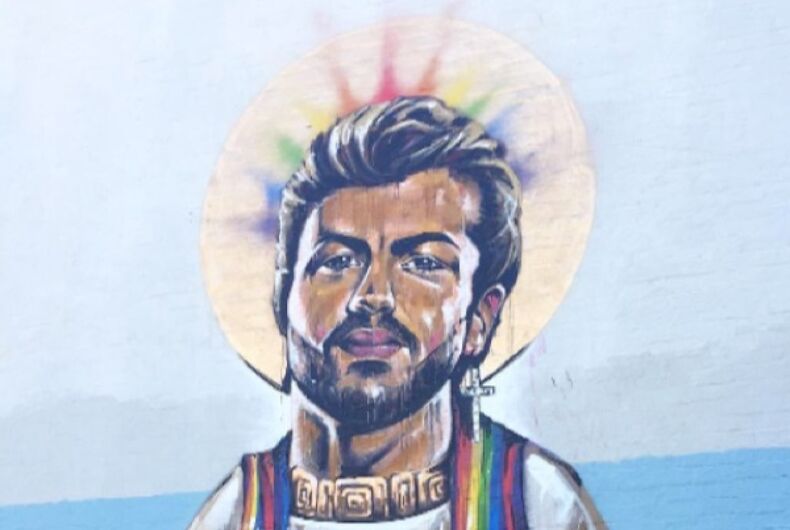 A Sydney artist and DJ have canonized George Michael, the British musician and gay icon who passed away on Christmas day, in a bold new mural depicting the “Patron Saint of Public Parks.”

“We wanted a tangible space and moment where our community could honour and celebrate this gayngel [gay angel] magic,” Stereogamous wrote on Instagram.

The title is a nod to the Wham! frontman’s infamous arrest for having sex in a public park. Depicted with a rainbow halo and stole, a joint and a bottle of poppers, the piece is a celebration of Michael’s legacy of embracing queerness.

While Michael wasn’t out at the height of his fame, the outing that followed his arrest prompted him to live an unapologetically out life.

But the Australian artists aren’t the only ones paying tribute to the late musician. London street artist Pegasus created a mural of their own shortly after his death, including the line “never gonna dance again,” from Michael’s hit “Careless Whisper.”

“George Michael’s music has always been a huge influence in my life,” the artist told Mashable. “From a young age he made me feel like it was acceptable to be different in this world.”

The musician will not only be remembered for the impact he had on queer people and artists — Sir Elton John was reported to be performing at Michael’s funeral — but also for his charitable acts for everyday people, often performed without fanfare.

What are your favorite tributes to George Michael?