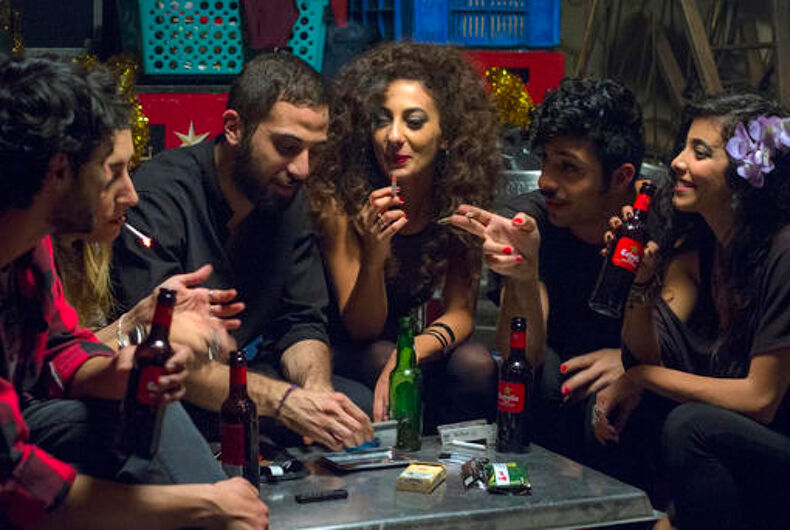 This undated handout photo provided by Deux Beaux Garcon Films shows a scene from the movie "In Between", the new award-winning film about Arab women battling their conservative society has touched off a real-life battle: the municipality of a major Arab city in Israel has called for a boycott of the film, and the film's director says she has received death threats for her unflinching portrayal of sex, drugs, parties, homosexuality and rape in her community. Photo: (Itay Gross, Deux Beaux Garcon Films via AP)

A new award-winning film about Arab women battling their conservative society has touched off a real-life battle: The municipality of a major Arab city in Israel has called for a boycott of the film, and the film’s director says she has received death threats for her unflinching portrayal of sex, drugs, parties, homosexuality and rape in her community.

The film has also caught many Jewish Israeli audiences by surprise, exposing them to a vibrant world of fiercely independent young Arab women — what the film’s director calls the “Palestinian underground.”

“In Between,” which has won accolades at Spanish, Canadian and Israeli film festivals, was written and directed by Maysaloun Hamoud, 35, and was inspired by her own experiences living in Tel Aviv for the last decade.

“It is the time now for women to come and speak up,” said Hamoud, who sports the title of her movie tattooed on her forearm in Arabic and English. “Until now, we were listening to men, and they were the ones to run everything.”

“In Between” is the film’s English title. In Arabic, it is called “Land Sea,” an expression meaning “Neither Here Nor There,” the film’s name in Hebrew.

The film tells the story of three Arab women who leave home to work and study in the live-and-let-live Israeli city of Tel Aviv. They find themselves stuck between an Arab society that often rejects nontraditional roles for women, and an Israeli society that while more open and Westernized, often doesn’t treat Arabs as full equals.

Arab-Israelis make up about 20 percent of Israel’s citizenry. But they share the same ethnicity, language and culture of Palestinians in the West Bank and Gaza Strip, and many identify as Palestinians rather than Israeli. As a result, many Jewish Israelis see them as a subversive fifth column.

In the film, there’s Salma, a lesbian DJ and bartender who wears multiple piercings and comes from a conservative Christian family. There’s her sharp-tongued roommate Laila, a lawyer who parties, drinks, chain-smokes, and dumps her boyfriend because he is embarrassed to introduce her to his family.

And there’s their shy, new roommate Nour, a religious Muslim girl from Umm al-Fahm, a conservative Muslim city in northern Israel, who studies computer science at Tel Aviv University. Nour’s fiancé, a devout Muslim who is affiliated with a charity in the city, considers Nour’s roommates to be bad influences, and tries to pressure her to leave them and get married before she is ready. He is portrayed as violent and corrupt, and a religious hypocrite.

“The message that I want to reach Palestinian society is that we are very, very strong women,” said Mouna Hawa, who plays the role of Laila. “We are not defects, our voice is not a defect, neither are our acts, responsibilities or decisions. We don’t even know we are that strong, because it’s as if we always need a man to be next to us.”

The movie is almost entirely in Arabic with Hebrew subtitles, and more and more cinemas in Israel are beginning to screen it. The director has been traveling across the country to speak to audiences at the screenings.

After one screening in downtown Tel Aviv, a Jewish Israeli viewer wondered if the scenes of raucous Arab dance parties really reflected reality. When another asked the director if her movie was reaching Arab audiences, she asked if there were Arabs in the audience, and dozens raised their hands, heaping praise on the director.

But much of the reaction from Arabs has been angry, with negative comments flooding the film’s Arabic-language Facebook page. “This movie is a whorehouse, it distorted the image of Islam,” one commenter wrote. Some social media comments have threatened the director’s life, Hamoud said. But some other comments were positive too. “All the respect, a great movie” another commenter wrote.

Riham Mahameed, a 22-year-old from Umm al-Fahem who studies at a university in Beersheba, had mixed feelings about the film.

“The characters are brave, representing the reality we’re trying to hide in all kinds of ways,” she said. But she complained the partying women of the film were not representative of all Arab women who like her leave home for studies and work.

“The movie showed only the bad things about girls living outside the home. Parents will be scared of what their daughters are doing,” Mahameed said.

Abd al-Monem Foad, a spokesman for the Umm al-Fahm municipality, said his city has called for a boycott of the movie because it gives the city, home to two central characters, a bad name.

Foad himself did not see the film.

Blogger Samah Salaime said a violent scene involving the Muslim man and his fiancée Nour is “juicy material for the budding Islamophobe,” though she notes the film includes a positive male role model in Nour’s father.

She referred to the Hebrew title of the movie when offering her critique of the film. “I found myself neither here nor there,” Salaime wrote.

© 2017, Associated Press, All Rights Reserved.
This material may not be published, broadcast, rewritten, or redistributed.
Life
LGBTQ movies, Tel Aviv