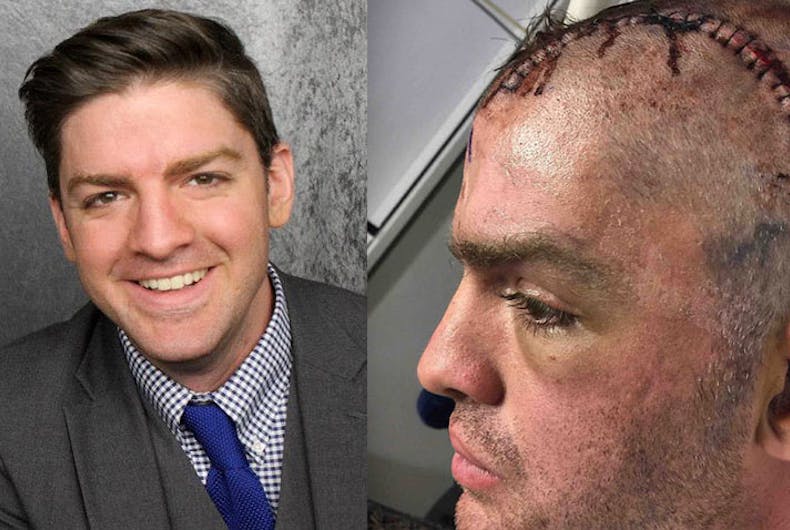 Police in Dallas have released surveillance photographs of two men wanted in Saturday’s savage attack on a gay man outside a Target store.

Derek Whitener, 33, suffered a fractured skull and had to have emergency surgery to stop bleeding in his brain after the men struck him with a large wooden dowel, measuring 3-feet in length.

Police say his assailants were wearing gorilla masks when they confronted him as he exited the store with groceries; they threatened him, then beat him. Some media accounts contradict the statement by detectives, reporting one of the men wore a ski mask.

Whitener’s partner, Victor Brockwell, shared the photos and the detectives’ description of the suspects on his Facebook page:

According to the Dallas Voice, the men did not rob Whitener, and because he is gay, “some of the victim’s friends are calling the attack an anti-gay hate crime.”

Whitener is the artistic and education director at The Firehouse Theatre in Dallas, and just prior to the attack he had performed in a production of “The 25th Annual Putnam County Spelling Bee.” Whitener is pictured second from right in the Facebook cover photo below.

“Before his surgery he was having difficulty forming words – a horrifying thing for someone as smart and quick-witted as Derek,” said their friend Brina Wingo, according to Gay Star News.

“They believe the surgery was a success but won’t sure until the swelling subsides.”

The neurosurgeon told her the hematoma in Whitener’s brain was gone, Wingo said Tuesday, but a large swelling was still affecting his speech and motor functions.

Wingo has set up a GoFundMe account to help the couple with Whitener’s enormous medical bills. In just two days, more than 1,400 friends have already raised in excess of $73K toward its goal of $100,000.

Watch a report from KTVT in Dallas about the search for Whitener’s attackers, below: