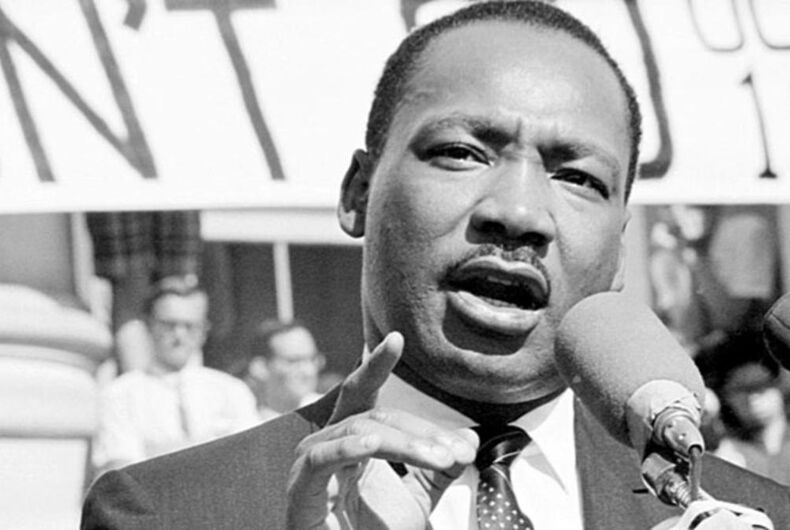 If he were alive today, King would be 88, and he would have seen that a lot has changed in the U.S. since that dark day he was gunned down on the balcony of the Lorraine Motel in Memphis by an assassin’s bullet on April 4, 1968.

Since King’s death, every struggling civil-rights group has affixed themselves to his passionate cause for justice.

The lesbian, gay, bisexual, transgender, and queer (LGBTQ) communities, in particular, have been reviled for not only naming our struggle as a civil-rights issue, but also for naming MLK as one of the civil-rights icons that would speak on our behalf.

But would King have spoken on our behalf?

As we celebrate MLK Day 2017, we no longer have to hold King up to a God-like standard. All the hagiographies written about King immediately following his assassination in the previous century have come under scrutiny as we come to understand all of King – his greatness as well as his flaws and human foibles.

As I comb through numerous books and essays learning more about King’s philandering, sexist attitude about women at home and in the movement, and his relationship with [gay March on Washington organizer] Bayard Rustin, I am wondering would King be a public advocate for LGBTQ rights?

James Cone, father of Black Liberation Theology and author of a book and several articles on King, states that we must understand King within the historical context of the black church. And in so doing, I find it ironic that the public King we witnessed on a national stage talked vociferously about social justice and civil rights for all people yet his personal life did not reflect the same ethos concerning women and gays. And would the public King have spoken out on LGBTQ justice, risking his already-waning popularity with the African-American community and President Lyndon Johnson?

In the address I gave at the Gill Foundation’s National Outgiving Conference in 2007, I said, “If Dr. Martin Luther King were standing up for LGBTQ rights today, the black community would drop him too.”

King understood the interconnections of struggles. And an example of that understanding is when he said, “The revolution for human rights is opening up unhealthy areas in American life and permitting a new and wholesome healing to take place. Eventually the civil-rights movement will have contributed infinitely more to the nation than the eradication of racial justice.”

This statement clearly includes LGBTQ justice, but would King have spoken on this subject at that time and even now?

In 1998, Coretta Scott King addressed the LGBT group Lambda Legal in Chicago. In her speech, she said queer rights and civil rights were the same. “I appeal to everyone who believes in Martin Luther King’s dream to make room at the table of brother and sisterhood for lesbian and gay people,” she said.

But King’s youngest and only living daughter, the Rev. Bernice King, thinks otherwise.

Standing at her father’s grave site in 2004 with thousands of protesters denouncing marriage equality, Bernice King, who has been rumored for years to be a lesbian, and Alveda King participated in a march against same-sex marriage in Atlanta. On speculating about her father’s viewpoint on marriage equality, Bernice said, “I know in my sanctified soul that he did not take a bullet for same-sex marriage.”

In January 2005, Newsweek asked Alveda King, the niece of Martin Luther King, who has aligned herself with the religious right, lending her family name and voice against LGBTQ rights, if Martin Luther King would be a champion on gay rights.

“No, he would champion the word of God,” she said. “If he would have championed gay rights today, he would have done it while he was here. There was ample opportunity for him to champion gay rights during his lifetime, and he did not do so.”

And that might be true. On the national stage, he talked vociferously about social justice and civil rights for all people, yet his personal life did not reflect that ethos concerning women and gays.

Sadly, Rustin, the gay man who was chief organizer and strategist for the 1963 March on Washington that further catapulted King onto the world stage, was not the beneficiary of King’s dream.

In the civil rights movement, Rustin was always the man behind the scenes and a large part of that had to be due to the fact that he was gay. Because of their own homophobia, many African-American ministers involved in the movement would have nothing to do with Rustin, and they intentionally rumored throughout the movement that King was gay because of his close friendship with Rustin.

In a spring 1987 interview with Rustin in Open Hands, a resource for ministries affirming the diversity of human sexuality, Rustin recalls that difficult period quite vividly. Rustin stated, “Martin Luther King, with whom I worked very closely, became very distressed when a number of the ministers working for him wanted him to dismiss me from his staff because of my homosexuality. Martin set up a committee to discover what he should do. They said that, despite the fact that I had contributed tremendously to the organization … they thought I should separate myself from Dr. King. This was the time when [the Rev. Adam Clayton] Powell threatened to expose my so-called homosexual relationship with Dr. King.”

When Rustin pushes him on the issue to speak up on his behalf King did not.

In John D’Emilo’s book Lost Prophet: The Life and times of Bayard Rustin, he wrote the following on the matter: “Rustin offered to resign in the hope that his would force the issue. Much to his chagrin, King did not reject the offer. At the time, King was also involved in a major challenge to the conservative leadership of the National Baptist convention, and one of his ministerial lieutenants in the fight was also gay.

“‘Basically King said I can’t take on two queers at on time,’ one of Rustin’s associated recollected later.”

When Rustin was asked about King’s views on gays in a March 1987 interview with Redvers Jeanmarie he stated, “It is difficult for me to know what Dr. King felt about gayness … ”

King’s popularity was waning before his assassination. For example, many observers argued that the plight of black America was not improving with King’s theopolitical ideology of integration. The rising Black Power movement thus challenged his movement of nonviolent direct action.

Followers of King felt he gave more attention to loving the enemy than doing something about the suffering of black people. Young urban black males in particularly felt alienated from the civil-rights leadership of King because his nonviolent ideology relied too heavily on the largesse of the white establishment, concentrated too much on eliminating segregation and winning the right to vote in the South, and ignored the economic problems of blacks in the northern urban ghettos.

And King’s interpretation of Black Power as “a nihilistic philosophy born out of the conviction that the Negro can’t win” lost him these urban black males as followers when race riots broke out across the country in 128 cities during the period of 1963-68. Disaffected observers identified the causes for the riots as high unemployment, poor schools, inferior living conditions, the disproportionate drafting of black men for the Vietnam War, and the assassination of civil-rights activists, none of which they saw addressed by King’s theopolitical ideology of nonviolent direct action.

Given King’s waning popularity, I am beginning to ponder now if he would have really raised his voice on our behalf.

Chatting on this subject with my friend Richard, an LGBTQ ally, online wrote, “I agree that you have to wonder whether King would support LGBTQ rights today, even if he felt he couldn’t in the ’60s. You’d like to think he would given his courageous stands otherwise.”

I now not only believe that King would not have supported LGBTQ rights, but his voice and importance on social issues would have continued to wane considerably. Coretta keeps King’s words, theology, and legacy alive by rightly attaching them to present-day contemporary social justice issues.

While it is clear as an LGBTQ community, King’s words resonate resoundingly to our cause, and we can take King’s words to march alongside us, I’m not certain we could take the man.

What do you think?