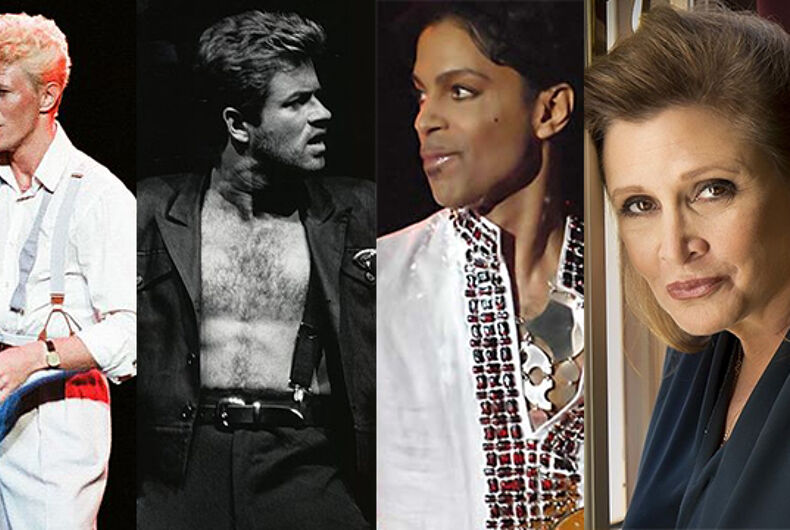 I think most of would agree that 2016 was a giant suck-fest from start to finish. The year that brought us Trump, Brexit, the Pulse shooting, and enough shocking celebrity deaths to rival George RR Martin and the producers of “The Walking Dead.”

But for LGBT members of Generation X, this was a particularly tough year. We saw our heroes and allies lose and suffered the loss of many of our icons. We said goodbye to pieces of our youth… and received a heaping dose of pessimism for our future.

It was hard not to feel a sense of hopelessness after the election. Not only did the candidate who supported our issues lose to the guy backed by all of our adversaries, but he was someone who’d been a household name for much of our lives.

Hillary Clinton first came to national attention in 1991, when Gen Xers were aged from their early to mid-20s to about 10 years old. We watched her through the up and downs of her life and political career. We saw what a fighter she was and how she never gave up.

For LGBTQ Gen Xers, we saw that she drove all of our enemies just as crazy as we did and faced the same kinds of ridiculous attacks we had to face – and many of us felt a common bond with her because of that.

Did we all like her? No. But we knew she was accomplished, experienced, and more than capable of doing the job. Her loss hurt more because we knew what she could have done if she’d won.

Perhaps the only thing that hurt as much as the election results was the loss of celebrity icons this year. While all of Generation X felt these losses, many of them hit LGBTQ Gen Xers hard.

David Bowie, who taught us that it was okay – and even glorious – to be weird. Prince, who showed us that embracing androgyny could be sexy. Elie Wiesel, who warned us of the dangers of bigotry in power. Gene Wilder, who gave us some of the iconic comedy moments of our youth. Janet Reno, the first Attorney General who was on our side. Florence Henderson, the ideal TV mom of our youth – and one who was always in our corner. George Michael, who was openly gay and unapologetically sexual. Carrie Fisher, who gave us a new icon of female empowerment and who was always, always, always on our side. And Debbie Reynolds, who was a gay icon almost from the start.

The passage of these and other celebrities took many of the icons of our youth from us. But the constant siege of bad news from around the world took away our optimism for the future as well.

LGBTQ Gen Xers – and all of Gen X for that matter – was the last generation to experience the Cold War. And we experienced the dark, scary final days of it in the early 1980s, when it seemed like the bombs could drop at any minute. We were sure the world would end before we reached adulthood.

And then, seemingly out of nowhere, everything changed. We watched the Berlin Wall fall, the collapse of the Warsaw Pact, and the implosion of the Soviet Union.

As we entered adulthood, it seemed as if the world was growing up. We saw real peace deals in the Middle East, the end of apartheid in South Africa, and the settlement of seemingly intractable conflicts in the Balkans, Northern Ireland, Central America, and Africa. The global economy was booming. Democracy was spreading. Perhaps, as we approached the year 2000, we were actually on the brink of world peace.

Today, the world is a far different place. Conflicts rage all across the world. Nationalism, xenophobia, and bigotry are threatening democracy. All that hope and optimism from the turn of the century now seems to be lost. Now we’re back to jokes about bomb shelters and fallout.

But all of this bad news from 2016 points to one thing: this may have been the first year that Generation X had to confront its own mortality and vulnerability.

From once being the focus of pop culture, we’re now in or entering midlife. Our hopeful youth is long gone and the passing of many of our icons reinforces that. We now can see that there is likely more time behind us than there is ahead. And that’s a hard realization to take.

For LGBTQ Gen Xers – and all of our generation – all we can do is move forward as best we can. We’ll continue to face great challenges in the years ahead and we’ll continue to do what we’ve always done: change the world.