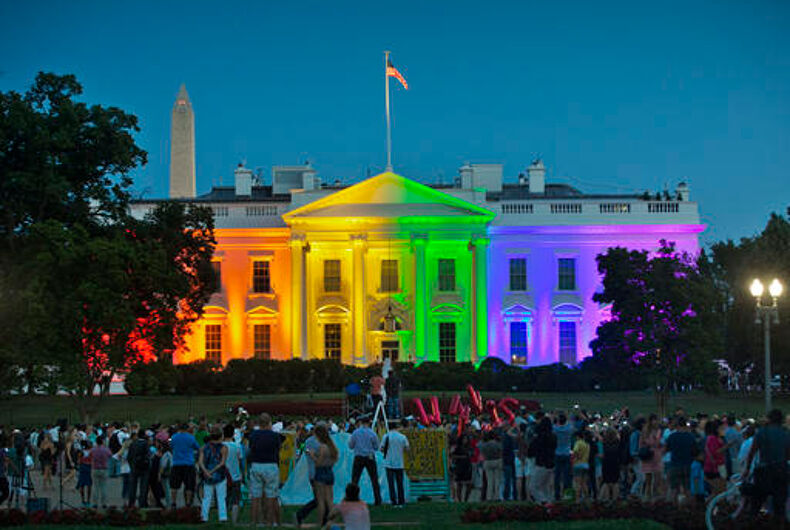 FILE - In this Friday, June 26, 2015 file photo, people gather in Lafayette Park to see the White House illuminated with rainbow colors in commemoration of the Supreme Court's ruling to legalize same-sex marriage in Washington. It was a new look for the White House: illuminated in rainbow colors to celebrate the Supreme Court decision allowing same-sex marriage nationwide. President Barack Obama, who was inside, felt the glow on that June night in 2015. To see people gathered in the evening outside on a beautiful summer night, and to feel whole and to feel accepted, and to feel that they had a right to love _ that was pretty cool," he said a few days later. Photo: AP Photo/Pablo Martinez Monsivais, File

It was a new look for the White House, bathed in rainbow colors to celebrate the Supreme Court decision allowing same-sex marriage nationwide.

President Barack Obama, who was inside, felt the glow on that June night in 2015.

“To see people gathered in the evening outside on a beautiful summer night, and to feel whole and to feel accepted, and to feel that they had a right to love — that was pretty cool,” he said a few days later.

That might be a fair description of how Obama himself is viewed by legions of lesbian, gay, bisexual and transgender Americans who consider him — among all U.S. presidents — the greatest champion of their rights and well-being.

The relationship was slow in developing.

Obama took office in 2009 as a self-described “fierce advocate” for gay rights. Yet for much of his first term, he drew flak from impatient, skeptical activists who viewed him as too cautious, too politically expedient. They were frustrated he wouldn’t endorse same-sex marriage — Obama cagily said he was “evolving” — and wanted him to move faster on several other issues.

But the pace of Obama’s actions steadily accelerated.

In December 2010, he signed legislation enabling gays and lesbians to serve openly in the military. In 2011, he directed government agencies to combat LGBTQ rights abuses internationally. By May 2012, soon after Vice President Joe Biden set the example, Obama endorsed gay marriage.

His administration also stopped defending the Defense of Marriage Act, which denied federal recognition to same-sex couples. That move helped clear the way for the Supreme Court’s historic same-sex marriage ruling in 2015.

In the nationwide marriage debate, Obama was not a pace-setter. A Gallup poll showed a majority of Americans supporting same-sex marriage a year before he did. But the president didn’t pause at the stage. He continued throughout his two terms to find ways to support the LGBTQ community even when Congress was in partisan deadlock.

According to a tally by the Human Rights Campaign, Obama’s administration has made more than 125 changes to regulations and policies to expand LGBTQ rights, and Obama appointed more than 250 openly LGBT people to federal positions, including 15 judicial appointments and nine high-level diplomatic posts.

Kate Kendell, executive director of the National Center for Lesbian Rights, said the policy achievements tell only part of the story.

“More than all of this, he honestly and without reservation embraced and celebrated our community as part of the human family,” she said. “He was not perfect, but he leaves a legacy that will be hard to beat.”

In the past year alone, there were several telling moments.

On June 16, Obama traveled to Orlando, Florida, to meet with the families of the 49 people killed four days earlier by a rampaging gunman at an LGBTQ nightclub.

“This was an attack on the LGBT community,” Obama said. “Americans were targeted because we’re a country that has learned to welcome everyone, no matter who you are or who you love.”

Eight days later, Obama designated the first national monument honoring LGBTQ rights: the site of the Stonewall Inn in New York City. A community uprising there in 1969, in response to a police raid, had helped energize LGBTQ activism nationwide.

While supporters of LGBTQ-rights are extolling Obama’s record, some religious conservatives say the president went too far in some cases, infringing on the religious liberties of Americans whose faiths disapprove of same-sex marriage.

“The Obama administration has waged an aggressive and unnecessary culture war,” wrote Ryan Anderson, a senior research fellow at The Heritage Foundation, in a recent column.

He urged President-elect Donald Trump to make clear that his incoming administration “will never penalize any individual or institution because they believe and act on the belief that marriage is the union of husband and wife.”

Professor and author Ed Stetzer, executive director of the Billy Graham Center for Evangelism at Wheaton College, recalled how Obama had reached out to evangelicals during his first presidential campaign in 2008 — an outreach that troubled LGBTQ activists. But Stetzer said many evangelicals became disenchanted by Obama’s later advocacy of same-sex marriage.

“He has tried to wade through some of the issues, but many evangelicals feel he didn’t strike the right balance,” Stetzer said. “They genuinely feel that their religious liberty is in jeopardy because of a shift on LGBT rights.”

Since Trump’s election victory, LGBTQ-rights activists have expressed fears that the new Republican administration will reverse some of Obama’s supportive executive orders and back legislation allowing some forms of discrimination against LGBTQ people if it’s based on religious beliefs.

Among those unsettled by the presidential transition is Cari Searcy of Mobile, Alabama, who along with her wife waged years of litigation seeking joint parental rights to their son. Their lawsuit overturned Alabama’s ban on same-sex marriage.

“After fighting such a long, hard battle for equal protections for our family, it is a very real concern that those rights could now be taken away,” said Searcy.

As for Obama, Searcy said he “revolutionized the way America sees us.”

“The policies and protections that our community gained under his administration changed our daily lives and included us in the national conversation,” she said. “We have come so far under his leadership, and for that, I will forever be grateful.”